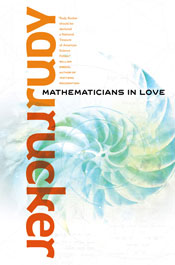 Rudy Rucker is high on crystal math. Yes, his science fiction makes prominent and casual use of drugs, both known and imagined, but ultimately the things that blow his mind (and that he hopes to blow yours with) are mathematical concepts. Rucker, who formerly taught computer science at San Jose State, has a long and vivid history with particular branches of abstract thought, both in a factual and wildly fictionalized context. Infinities, cellular automata, artificial intelligence (and AI rights), topology, and so much are threads that weave through his work in strange and unpredictable ways.

Mathematicians in Love is Rucker at a frenzied pace. Taking place on a multitude of sequential earths – each an attempt by some sort of ur-jellyfish to create a perfect model – the story follows the arcs of Bela Kis, Hungarian/Chinese mathematician and Math Ph.D. candidate, fellow candidate Paul Bridges, love triangle interest (and Rhetorics major) Alma Ziff, bassist/stripper Cammy Vendt, and many others, as they explore academia, rock bands, alternate realities, kingmaking, alien mathematics, and more. Bela, our narrator and central character, starts out in Humelocke, an analogue Berkeley, earns his doctorate and embarks on a musical career with the spontaneously-created Washer Drop. As he careens between gigs and metamathematical discoveries, there’s intrigue from NSA-funded academic rivals, Roland Haut (his thesis advisor), technologist-turned-politician Van Veeter and so on. Within the plot is an adroitly spun roman à clef of America’s current political situation, a topic which ultimately fuels a significant part of what takes place.

Rucker references a lot of math, but you don’t have to be mathematically inclined to appreciate this fictional work. The alternate Earths our characters inhabit are called “docile” by the aliens – they may be complex, but ultimately predictable. Mathematicians in Love is anything but docile. As in real life, people and events are often random to the point of absurdity. Yet for all these cartoony characteristics, things remain ultimately believable and human. Our protagonists have their flaws and small triumphs, things that are so closely drawn from real life I’m often left wondering which details come from direct experience that Rucker has had and which are just the result of keen observation and a wild imagination.

Ultimately, the book is propelled by some big heavy ideas, and without the author’s irreverent style, the whole thing would fall apart under the weight. As soon as Rucker has hold of something, the narrative integrates it and takes it to further conclusions. This is something that is common, almost required, in science fiction, but Rudy Rucker is unique in making the process such an unexpected ride.