The Diving Bell and the Butterfly

The Diving Bell and the Butterfly

Julian Schnabel might be a prick, but The Diving Bell and the Butterfly is all the better for it. Most famous for his neo-expressionist artwork, Schnabel is also known for his larger-than-life persona, flights of pretentiousness, and massive helpings of hubris. Perfect cocktail for a director, right? On this, his third film (Basquiat and Before Night Falls are his two previous), Schnabel sheds his moonlighting image and enters the ranks of serious filmmakers.

The Diving Bell and the Butterfly is a true story about a successful French magazine editor, Jean-Dominque Bauby, who was struck with the very rare “locked-in syndrome,” which is a paralyzing condition that leaves the afflicted with all his mental faculties, but unable to talk or move. With one good eye, a brilliant therapist, and patient transcriptionist, Bauby was able to create the book upon which the film is based, The Diving Bell and the Butterfly. 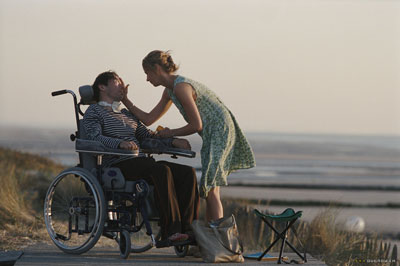 As a film, nothing about Diving Bell should work. Schnabel, who doesn’t speak French, demanded the film be made in French, with French actors, in France. He shoots the first bit of the film through the eye of the paralyzed protagonist; Jean-Do’s hazy perception is telegraphed through corner shots, odd croppings of his own hands and feet, people dangling in the edges of frames, and lots of muffled dialogue. The color palettes of antiseptic blues and sickly greens make it look like a home video excavated from a much earlier time than either 2007 or the 1995 in which the film is actually set. The film sparingly flashes back to a lithe and limber Bauby, forcing us to stay with him in his wretched discontent as he struggles to communicate, longs to touch his children’s hair, and is morose about the fact that his son has to wipe the drool off the corner of his mouth. Not the by-the-numbers approach usually approved for “based on a true story” movies.

Still, from the opening frames, The Diving Bell and the Butterfly drags you down to its depths and woos you with its humanity. Schnabel uses the camera to reveal Jean-Do’s character – languishing on the female therapists’ chests, lips, and faces, and finding them in the corners of the frames; it subtly exposes Jean-Do’s shame, lust, and fear. In his previous films, Schnabel has been criticized both for trying to overwhelm his subject with his own presence, as in Basquiat, and for keeping his subject at arms length, as in Before Night Falls. In The Diving Bell and the Butterfly, Schnabel’s camera becomes the subject, creating a powerful triangulation of experience between filmmaker, subject, and audience that is truly entrancing. 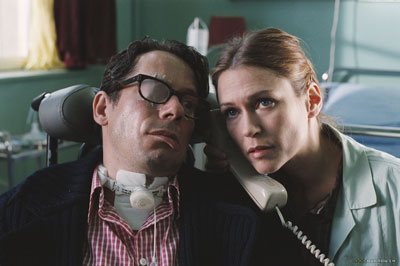 Credit is also due to the superb cast. Mathieu Amalric does subtle work as Bauby. His gummy but handsome face, with its hints of Serge Gainsbourg, is childlike yet arrogant – just the type of mug you’d expect from a magazine editor. In flashbacks, we see a carefree Jean-Do who seems every bit the rambunctious cosmopolitan we expect. In reality, Diving Bell is a deliberation on life seen from the threshold of death, and Amalric is excellent at portraying both his defiance and ambivalence. Bauby’s regrets are largely about his star-crossed liaisons that become painfully intertwined – one with the mother of his children, Celine (Emmanuelle Seigner), and the other with his mistress, Josephine (Marina Hands).

Bauby’s entire world is populated with nothing but beautiful women who remain beyond Bauby’s grasp – from his dutiful caregiver Henriette (Marie-Josée Croze) to Schnabel’s own wife (Olatz Lopez Garmendia) who plays Bauby’s physical therapist (punishment for his inability to truly appreciate them when he was more capable of enjoying their vitality?). Seigner’s performance is the most layered and sympathetic. She exudes emotion, even though she plays mostly into the camera or opposite a motionless actor. Seigner brings a grace to her woman scorned, revealed most vividly in a scene where she is forced to play translator between Jean-Do and his new lover. Her radiance and tenderness are both maddening (why would he leave her!) and believable as, ironically, emboldening for a man predisposed to philandering.

Schnabel claims his film is really about women, a distinction with which I strongly disagree. While he does an excellent job of revealing women as full-blooded human beings, he gets dangerously close to angelicizing them (Julian, womanhood is not sainthood!), and Diving Bell is still very much about the male gaze and male desire. In this regard, the film works as an unintentional reversal of Pedro Almoldovar’s fantastic Talk to Her, where it is the women who are paralyzed, and the audience is confined to the lustful intentions of their male caregivers.

So how does such a pompous personality make such an arresting film? Schnabel has said that his greatest fear is death, and that the recent experience of losing his father made this film a very important and cathartic project for him. That, by itself, is not unique. Everybody’s greatest fear is death, and even the select few who don’t fear it can’t claim to understand it. In Diving Bell, what is unique are the effects of said fear and how the inevitability of death serves to deflate the self-aggrandized man behind the camera, as well as on the screen, with Schnabel seemingly giving his creative powers over to a bigger purpose.

By tackling such an ambitious project – as an American trying to communicate with French actors on foreign soil – Schnabel creates the most incredible parallel between himself and his movie’s subject – trying to communicate his feelings about death, loss, and regret to his actors in the same way Jean-Do must try to communicate those feelings to his translator through an intermediary lexicon. It only adds to the film to know that Schnabel’s own wife appears as Jean-Do’s physical therapist. When Jean-Do muses, “you are so beautiful” to himself while watching her, it’s Schnabel talking through him; the camera lingers, and it’s the most authentic camera-as-director moment I’ve ever witnessed on film.

In the end, the sobering specter of loss mutes Schnabel’s intellectualizing, while at the same time, his impudence snatches the film from the mouth of sentimentality. It is Schnabel, the director, who emerges as the butterfly, an assured and powerful filmmaker whose subtle and delicate film embraces the soft tissues of human-ness.

The Diving Bell and the Butterfly is open now in select cities. Check your local listings for details.