The Sun: Blame It On The Youth 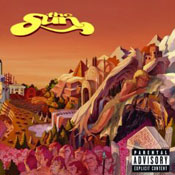 This slick little DVD/album holds 15 videos from an exciting Power Pop quintet out of L.A. “The Sun” captures that late 1980 Los Angeles punk scene with neatly arranged pop tunes and a lead singer (Chris Burney) who can still pogo like a pro. Rather than just put out the music, the songs are presented as full videos, and those videos are as good as anything from MTV’s opening night. “We Tried” has the band sitting around a table of cakes in the afterworld, then we flash off with each one to see how they meet their end. “These Heights” sets the band as a cartoon herd of Koalas surrounded by ominous Technicolor kangaroos. Best of these short films occurs on “2B4” where the band and their girlfriends are attacked and overcome by boxes of newsprint. Added features on this disc are slim, but there’s one thing worth noting. All the audio files are included as .WAV files, so if you want to burn your own audio CD, load them onto your iPod, or abuse them in any other non-RIAA manner, you are free to do so. These guys rock in my book – cool songs, cool videos, and no electronic hassles to keep you from enjoying the product you purchased.