St. Patrick’s Day is upon us and whether you’re of Irish descent or not, this time of year is always appropriate for taking in a Flogging Molly concert. 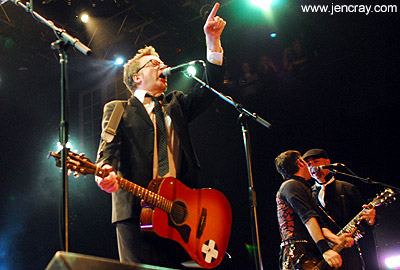 In the midst of their annual Guinness-sponsored Green 17 Tour, the seven-piece from Los Angeles stormed Orlando’s House of Blues with a pair of bands whose musical tastes also leaned in the direction of the Emerald Isle. The Cherry Cokes and Reverend Peyton’s Big Damn Band were just a footnote on the chalk marquee to the 2,500 fans who had cashed their paychecks and lined up at bar to begin the party that would reach its peak when Flogging Molly hit the stage. 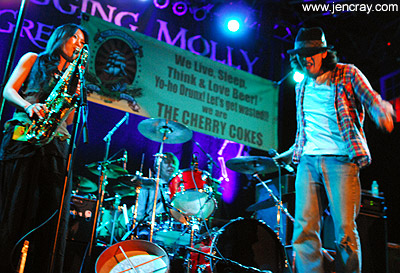 “We live, sleep, drink, and love BEER! Yo-ho drunx! Let’s get wasted! We are The Cherry Cokes!” read the banner above the opener’s drum set. It could also have read, “we play traditional Irish jig music complete with the accordion, mandolin, and banjo, only we play it faster, and by the way… we’re Japanese!”

The Asian-flavored display of Irish fervor was an unexpected treat. Though no one could figure out whether the ever-smiling front man Yuichiro Sakamoto was singing in English or Japanese, one thing was certain, the dude made playing the banjo look cooler than anyone else in history! He wore the notoriously backwoods instrument like a hip fashion accessory. 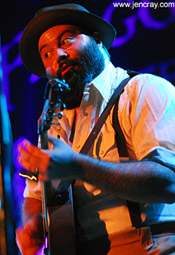 Reverend Peyton’s Big Damn Band took the mood on a downward spin, for me at least. The large bearded Reverend played a mean slide guitar, and his wife beat the hell out of the washboard instrument that she hugged to her chest, but something about this band unsettled me. Maybe it was the Deliverance vibe that emanated from this hillbilly blues trio that left me itching for their performance to end.

Slamming down another beer helped to bring my spirits back up to their proper place just in time for the headliners.

When the lights dimmed and The Who’s “Baba O’Riley” blared over the loud speakers, even the security guards were like giddy children. “If I have to throw anyone out and I miss any of this show, I’m gonna be pissed,” one of them confessed to me while revealing the Flogging Molly shirt he wore beneath his uniform. 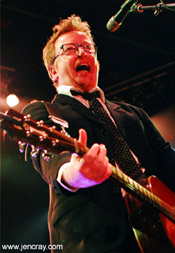 Flogging Molly fans are like soccer fans, and there’s a near-volatile edge to their loyalty that borders on fanaticism. They throw back their pints, they proudly wear their band shirts, and they dance and crowd surf themselves into an ecstatic frenzy. I wouldn’t expect a band that, unlike other Irish-inspired modern acts, doesn’t often fall under a punk-rock umbrella to churn up such a commotion, but their audience would make bands like Dropkick Murphys envious.

I’m not familiar with the band’s pre-_Float_ material, so I can’t supply you with many song titles. But I can say that there were plenty of tunes that had the rabid fans busting at the seams. I can only assume that these were the old favorites!

Grab a beer, put your dancing shoes on, and spend March with Flogging Molly!