with Over the Rhine

I used to catch an Ani DiFranco show at least twice a year, back when the little folksinger was perpetually on tour. A bout of tendonitis sidelined her for much of 2005 and 2006, and then having her first child at the start of 2007 kept her homebound for a bit longer. For these reasons it has been four years since Ani dropped in on her fans in Florida. When she finally did decide to schedule some dates within driving distance of yours truly, my personal schedule of shows to attend was so tightly packed that I almost missed her once again. 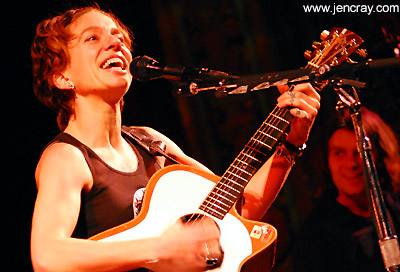 I went to Langerado in the Everglades, but left before she played in order to catch Riverboat Gamblers back home in Orlando. Lucky for me, two days later she was set to play just south of me, in Tampa, at the incomparable Tampa Theatre. The theatre, built in 1926, is one of the most gorgeous venues I’ve ever stepped foot in. Built in a style dubbed Florida Mediterranean, the elaborately sculpted interior has elements of all of the great schools of architecture — from Italian Renaissance, to Greek, to Baroque. Stars are painted on the ceiling and ambient golden colored lights shine upon the sculptures carved into the sides of the stage, all of this giving the illusion that the indoor theatre is actually outdoors. It’s quite stunning. 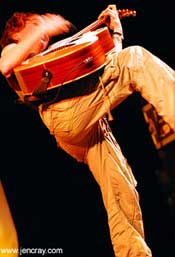 Over The Rhine’s lush, but sleepy, opening set went surprisingly well for the majority of the subdued and seated crowd. Gorgeous as vocalist Karin Bergquist’s voice was, I found my attention wandering. The one song that managed to really grab hold of my ears and hold them was the politically leaning, “If A Song Could Be President.” Lots of name-dropping of folksingers throughout the ages who would make great members of a more perfect government produced the expected cheering. While the weekend activists shouted their approvals for a world where Steve Earle was an anchorman, Neil Young was a senator, and Ani DiFranco ran the economy, I came to the sad conclusion that while songs like this have noble intentions, they never seem to inspire the proper activism needed to actually effect a real change. If a song could be president, what song would it be in this sad, sad world? Maybe “Tell Me Lies,” by Fleetwood Mac… though I long for a world where it could be something more like “Walking on Sunshine.” 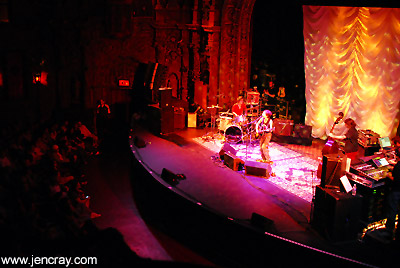 Shaking off the dust of those depressing thoughts, the appearance of DiFranco set things straight in my worrisome head. Sporting a newly cropped haircut that made her look at least ten years younger, it was only appropriate that she should open up with an old tune: “Names, Dates, and Times” off 1994’s Puddle Dive. Joined onstage by drummer Allison Miller, bassist Todd Sickafoose, and Mike Dillon on percussion and vibes, DiFranco was in top form. She pounded through a set of songs that mostly dated post 2004, with only the occasional nostalgic “hit” tossed in for those of us aching to hear something from our teenage years. 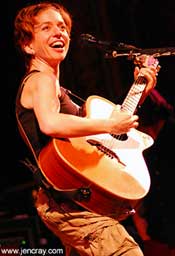 When she did decide to dig into her bag of the past she pulled out “Gravel,” “Swan Dive,” and a heart-stopping rendition of “Napoleon.” In between songs, she was her usual chatty, candid self. She joked about what it was like giving birth, she encouraged everyone to reclaim the word “feminist” and use it proudly, and she laughed about venue staff and their concern for the seated show. “They said to me, ‘what are we gonna do? Some people are gonna want to get up, and some people won’t.’ (Ha-Ha) It’ll be ok, don’t worry…”

On the topic of the assigned seats, it was a little odd. Maybe the fans are just getting older and don’t have that desire to be close enough to feel her sweat like they used to, but this was the first time in the eighteen (yes, 18!) times that I’ve seen her over the years that people mostly stayed in their seats. A random fan here and there would make a timid attempt to move forward, only to be turned away by venue’s polite security. It wasn’t until the last song that most people got up on their feet. For the encore a select little group ran down the aisles and closer to the stage and, for a second, it felt like it used to feel back when I first started attending her shows in 1994. 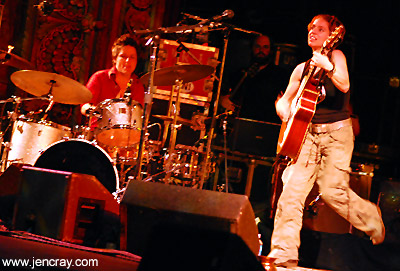 For her encore she played “Evolve,” and “Hypnotized.” By all accounts it was an amazing performance, but the audiences of today need to take a lesson from their own pasts. Remember when attending a concert wasn’t like going to the movies? Remember when the thought of remaining in your seat, especially during the upbeat songs, was unheard of? Don’t worry about the folks in the row behind you, they’ll get up. You paid your admission, enjoy yourself!