As the fiery lyrics of emcee Brother Ali and DJed beats of BK-One simmered down, sweat was dripping off my steaming skin and I headed to my car in the cool night air. I was amazed at how effortlessly Brother Ali led us in celebrating hip-hop’s krush-groove roots, its underground indie-rap present and promising future. 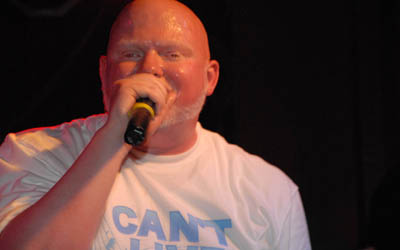 Brother Ali charged on-stage like a rhino, gripping the mic and whipping it free of sweat and spiddle after the first song. His t-shirt read, “I can’t live without my radio.” LL Cool J rapped passionately about his love for radio in that song, but it’s not the silk screen old school shout-out that made Ali’s performance so compelling. It’s what the shirt clung to – the hybrid fusion of Muhammad Ali audacity, KRS-One tenacity, southern-baptist preacher, soulful swagger, and an overpowering similarity to Biggie Smalls’ size and gentle giant sensibilities. All of it poured on the crowd as he motored through tracks from 2007’s The Undisputed Truth and then back with tracks from 2004’s Champion EP, 2003 debut Shadows of the Sun, and the demo tape Rites of Passage. 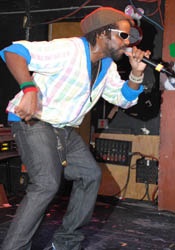 With rhymes ripped directly from his life, the emotional connection between him and his fans was red-hot and electric. Like rapper Slug of the Minneapolis duo Atmosphere, Ali doesn’t shy away from dishing out his life struggles and joys in song. He allows the vulnerability, swagger, and boldness to co-exist and flourish in the dynamite concoction of cathartic contradiction. These traits are necessary for most Rhymesayers’ artists. Their style of hip-hop has occupied the hearts, minds, and backpacks of fans since the late nineties when indie-rap found a way to reach a hungry audience of white Midwestern rap fans (those who loved hip-hop but couldn’t identify with gangsta bling and didn’t want to be the labeled as Eminem).

Usually you’re at a concert because the artist or his music mirrors you in some way. Like me, Brother Ali is white, loves hip-hop, and grew up in the Midwest. His show is a brilliant display of why hip-hop knows no racial boundaries. Beyond being a gifted emcee who can superbly control his lyrical speed and breath and colorfully croon the end of verses if needed, Ali is a devout Muslim, is legally blind, and albino (three traits that make his mix of soul, rap, and spoken word even more potent). 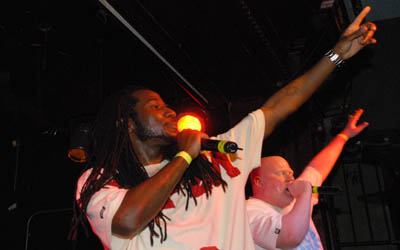 After dropping props to Chicago’s recent contributions to hip-hop – Kanye West, Common, Lupe Fiasco, and Rhymefest – Ali surged toward the end of a their recent tour, wrapping his arms around the crowd’s heart with “Take Me Home,” leaving them consecrated and hungry for more. 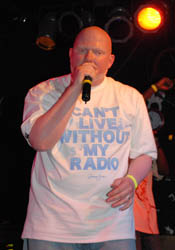 “Get your fist in the air and rock on, rock on!” commanded opener Toki Wright who ended his set of classic emceeing, acapella rhyming, and spoken word with a leap into the crowd and a final sprint to the balcony where he watered a fresh crop of fists ripe for a coup of commercial gangsta rap and frustration with the present administration. Like Ali, who he joined on-stage later, Wright celebrated the hip-hop emcee-in-the-park roots via two turntables and a microphone. Unsigned at the time of show, I wondered why he hasn’t been snatched up yet because he not only poured the necessary gasoline on the crowd to set up Ali, he also upstaged Abstract Rude in all areas of emceeing, especially when he spit the freestyle verse where he deftly melded dead dogs, Michael Vick, and Myspace profiles.

In between Ali and Wright was the west coast rap and trippy reggae of Abstract Rude who celebrated the sly beach front bliss of his hometown by trying to encourage (or taunt) the sun-depraved Chicago crowd with a sunglass-wearing and sunshine drenched track. We all enjoyed the three-minute climate escapism and the old school numbers, but ultimately the joke was on us, as the beach-chilling track faded and the reality of the cold outside temps returned.

Even with all the ubiquitous bling of commercial gangsta rap, Rhymesayers and most of indie-rap acts have been steadily doing their thing for the last several years under the mainstream radar. And with artists like Ali, the crew keeps getting better and stronger.