Avenged Sevenfold, Atreyu, Bullet For My Valentine, Blessthefall, The Underneath, Mucc, Idiot Pilot

The fourth annual Taste of Chaos Tour rolled indoors for the Orlando date this year, moving from Tinker Field to the UCF Arena. 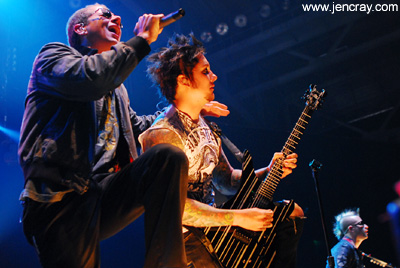 Previous years had the advantage of the cool spring air and the expanse of an open field. The naturally soothing elements offered a beautiful balance to the often oppressive screamo music. As nice as the brand new arena was, a limited number of general admission floor tickets meant that the majority of the audience was seated well up into the rafters. This type of seating may be fine for a standard big rock show, but for the five-hour mini festival geared toward teenagers hopped up on energy drinks, it didn’t help the already sub-par performances. 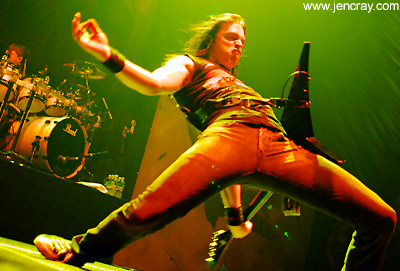 Jen Cray
Bullet For My Valentine

For TOC virgins, the layout is a simple and efficient one. There is one large stage for the main acts and a tiny squared off area in the far corner for in-between acts. While the smaller bands are playing, the big stage bands are setting up. This way there is never a gap between music, except for the 20-minute interval between the two final big stage acts of the night. 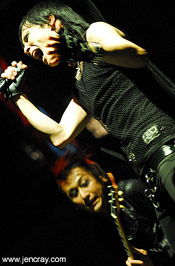 Jen Cray
The Underneath

I walked in as Idiot Pilot was breaking in the side stage for the early arrivers. The ear-cracking trio may just be the worst example of modern music I have yet to witness live. The singer’s voice was a relentless howl, and after dedicating a song to his “niggers and bitches,” he gave a preachy speech about how racists, sexists, and homophobes should not be tolerated. His already despicable persona worsened. I’m sure that he was attempting to be ironic, but it didn’t come across as so.

The next couple of acts were part of the tour’s JRocc Revolution-sponsored triplet of Japanese bands. The Underneath were the most interesting of the three, sounding like an Asian-flavored HIM. I’m not sure if that’s a good thing, but I call ‘em like I see ‘em.

After Bullet For My Valentine delivered the most metal-sounding performance of the night and the most awe-inspiring example of drumming, Blessthefall proceeded to give the most memorable set of the fest. To begin with, they were playing under unusual circumstances. Security was leery after a particularly volatile BFMV set and so the lights remained on the crowd while the band played in darkness. Frontman Jared Warth did a front flip over the sizable gap between the stage and crowd and spent much of the band’s twenty minutes atop the hands of excited fans. 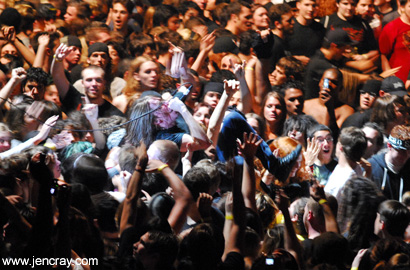 The tour’s veterans, Atreyu, have been inching their way closer to the headlining spot year by year, proving that, no matter how much it depresses me to say it, kids love metalcore. Not only has Atreyu’s popularity tightened up since their first run on the tour a few years back, so has the torso of singer Alex Varkatzas. 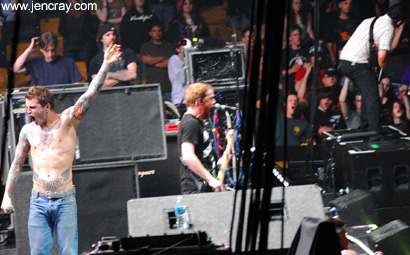 Atreyu’s set was plagued by distraction as security was busy reviving an injured girl at the front of the stage for the first couple songs of their crowd-pleasing set. The fact that the show was even allowed to begin while a fan was down for the count just inches from the stage was a little disheartening. I can only hope that the powers that be didn’t get word of the injury in time to stall the set. 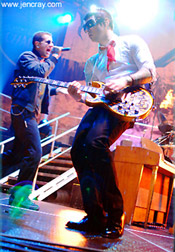 Avenged Sevenfold like to think they are carrying the torch of ’80s metal. They’ve got the fashion, the rock star poses, and even the grand pyrotechnics on-stage, but what they’re forgetting is that those metal bands that they so aspire to be also had the great songs. The audience would tar and feather me for criticizing the closest thing that their generation has to what us elder statesmen had in Guns N’ Roses, but it must be said!

Have A7X made an Appetite For Destruction, a Girls, Girls, Girls, or even a Slippery When Wet? No! And they probably won’t because they’re trying way too hard to look the part, rather than just be the part. They should concentrate on developing the music first, because until that gets tight, all of the explosions, fog machines, and chummy poses with band mates on-stage doesn’t mean much.

The men who brought you Taste of Chaos and Warped Tour have just announced a third festival undertaking called Mayhem. The inaugural tour will feature Slipknot, Disturbed, and a dozen other mainstream metal acts this summer.