by Fred Perry and Eric Nolen-Weathington 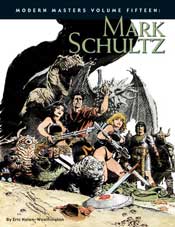 After covering comic book icons like Alan Davis and John Byrne, TwoMorrows has set its microscope on Mark Schultz for its latest volume in the Modern Masters series. Schultz is best known for creating the indie hit series Xenozoic Tales, a futuristic cross between Jurassic Park and a classic car show. You might also remember Schultz’s archetypal heroes Jack and Hannah Dundee from the TV spin-off aptly titled Cadillacs and Dinosaurs. Don’t think Schultz is limited to drawing beautiful women driving big cars and shooting dinosaurs, though. Oh no, he also draws beautiful women battling Aliens and Predators and seducing heroes like Conan and Superman. Will Eisner’s name is dropped more than once and the connections between Sheena and Schultz’s leading ladies are obvious.

It goes without saying that Modern Masters covers Mark Schultz’s entire portfolio in style. There is an entire chapter devoted to his traditionalized version of Conan, including three awesome color reproductions of artwork from The Coming of Conan the Cimmerian. There are also several great sketches of Conan, Tarzan, Hannah Dundee, and various other heroes and monsters Schultz has worked on. With its trademark easy-going interview style and plenty of sketches, the entire Modern Masters series will give you a new appreciation for working comic artists and have you scouring the comic bins at your local shop for some terrific back issues.