Very few musicians can stun me stupid with the simple inflections of their voices and the subtle strumming of their guitars. Langhorne Slim and his band of War Eagles did just that when they gifted a very intimate gathering of us at The Social in Orlando with a performance to be envied by those who missed it. 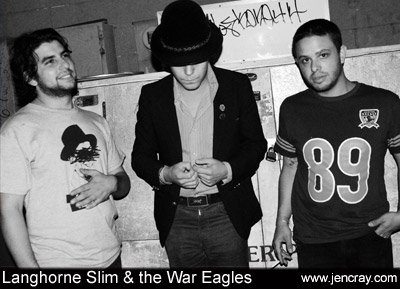 Believe me when I say “intimate gathering.” The 40 or so of us in attendance could hardly be called a crowd. Though Slim recently made his television debut on David Letterman, most are still in the dark about both his name and his music. That’ll change soon enough. 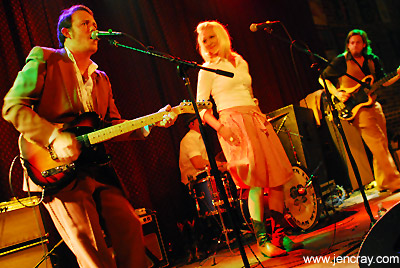 The country time husband/wife duo of Heather Lee and Jordan Wynn brought their less blues/more country interpretation of Robert Plant & Alison Krauss into the city all the way from the back roads of Umatilla, Florida. The pair, who were joined by a drummer and a bassist who was fresh from his college graduation (“making Charlie the only college graduate in the group,” offered Wynn), speak with the sort of southern sweetness not heard since the days of Johnny and June Carter. It was endearing enough to make me pay attention to their music which, in all honesty, was too bluegrass for my taste. 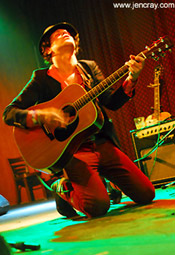 Cradling a whiskey on the rocks and dressed in an outfit that could have been lifted out of Jack White’s closet, Langhorne Slim let me in on a little insight behind his unusual name. “It’s a nickname I gave to myself when I was bored as a kid,” he confessed.

With little fanfare, Slim, upright bassist Paul Defiglia and drummer Malachi DeLorenzo stepped into the lights in front of a near empty room. Most of those in attendance sat 15 feet away up at the bar, but as the band opened up with the soulful and gorgeous “Diamonds & Gold,” all possibilities of mere casual concert viewing were gone. Not a creature was stirring. 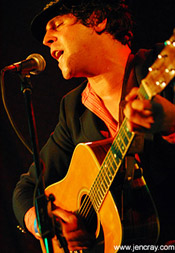 Slim plays with a balls out exuberance not commonly found in singer/songwriter folk artists. He stands atop the bass drum, falls to his knees in Hendrix-like ecstasy, and even finds his way onto the top of the bar – a move previously reserved for punk vocalists.

All of these sorts of dramatics were bound to get attention, but when Mr. Slim delivered solo, incendiary performances of “Colette” and “Rebel Side of Heaven,” even the bartenders stood rapt. One went so far as to buy the man another drink, and hand it up to him onstage.

By the show’s closing, an encore call was answered and the upbeat “I Love to Dance” inspired six young dudes to throw their arms around one another and do just that. From timid stage viewing, to unabashed release. This was the sort of inspired live show I had been aching to see for months! These are the songs that will saturate my heart and mind when so many other songs shatter before they even fully penetrate my eardrums. 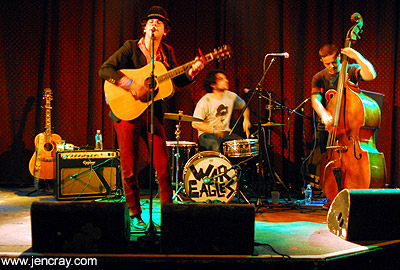 “I cannot stop listening to your album,” I told the man in the hat.