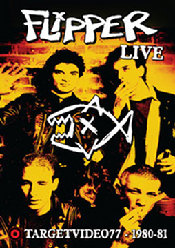 Remember that one band in high school or college – the one that drew huge crowds every time they played, even if they weren’t really technically that good? How half the fun of seeing them was the fact that they were sloppy and out of tune and seemingly constantly on the verge of falling apart, but everyone in the audience had a great time anyway and half the crowd would rush up on the stage to sing a couple songs even though they didn’t really know the words?

Although notorious for their motto, “Flipper suffered for their art, now it’s your turn” and churning out slow, arty noise while their peers were blasting out three-chord thrash, the recently reissued Flipper Live 1980-81 shows a band much more playful and fun than their confrontational reputation. At least for one of the shows.

Although dogged by a poor guitar sound, Flipper’s show at Berkeley Square in July 1980 is great, sloppy fun. Half the fun is watching drummer Steve DePace bravely keeping the beat while the rest of the band flails about in front of him. On “One by One,” the sight of Will Shatter with a Budweiser tall boy in one hand, the other arm pounding his open bass, making a sound like a spooky cathedral bell is a perfect example of the art, the passion and poetry of the band captured in front of a receptive audience.

Shorter songs like “Friends” and playful songs like “Oh, Oh, Ay Oh” show that rather than a group of dour art scolds, Flipper had a sense of humor and could be full of life on stage. The long, messy rendition of “The Wheel,” where some dude from the crowd grabs the mic before realizing he only knows the chorus but gamely stays on stage anyway, and “Ha Ha Ha,” and “Lowrider” are all reminders of just how much fun punk rock really was.

Although shot less than a year later, there is a noticeable chilliness in the second show at Kezar Stadium opening for Throbbing Gristle. Much of the fun seems to be sucked out of the performance, which probably isn’t helped by the austere lighting and films projected behind the band. While technically better sounding (you can actually hear the guitar at this show), the endearing sloppiness seems to have dialed down a bit.

A 1983 TV performance of “Sex Bomb” is included as an extra. Although the performance is great and the sound is better than both full concerts, the video is marred by bad ’80s effects. While the double exposure effect might have been cutting edge in 1983, here in 2008 it gets annoying quick.

For Flipper fans, or fans of punk, art-rock or shambolic public spectacles, this DVD is a gift from above, a rare chance to see and hear the original band in action, especially since Rick Rubin has been hiding the original CDs in his beard for years now instead of reissuing them. For non-Flipper fans, maybe not so much. As my wife walked through the screening, her comments were, “How are you going to review this” and “This sounds like early Joy Division, but more yell-y and… bad.” So buyer beware, I suppose.