Life is Worth Losing

Life is Worth Losing 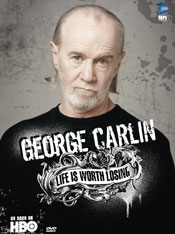 Carlin starts Life is Worth Losing with a four-and-a-half minute rap that has more relevance than nearly every other rap album ever made. “I know the upside of downsizing and the downside of upgrading. I’m over the top and under the radar…I’m an alpha male on beta blockers.” You have never heard a 70-something bald, graying man dressed in all black freestyle like he’s been doing it for 50 years – because he has.

So after the greatest rap in history he comes back with “You know what people don’t talk about enough? Pussy farts.” Yep, this is Carlin at his realistically cynical best. He muses about words that he thinks should be said more, such as “dingleberry” and “cornhole.” “I love to watch CSI…and I would love to have the chief examiner say…well after they shot him, then they cornholed him about 34 times.”

Carlin also makes his pitch for a new TV station: The All-Suicide Channel. He thinks that you could find enough stupid people who would off themselves for “about $500.” Or get a religious cult to hold hands and jump off the Grand Canyon. “Just tell them that there’s a t-shirt at the bottom.”

“Life is Worth Losing” is another classic routine from George Carlin. It is full of quotable lines and shocking language, just what we’ve come to expect from Carlin. Seventy-five minutes has never been so entertaining.