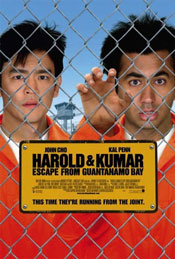 When you willingly make the monetary transaction at a theater to see any kind of teen movie (in all of its many variants), you accept the fact that what you will see is not likely to be classified by conventional definition as being a “good” movie. You forfeit that common sense that you’ve learned as a breathing, thinking human being in order to be potentially entertained by comedy that you will probably forget as soon as you toss your empty popcorn bag into the garbage. You assume certain conventions and clichés are bound to appear, and it is no sort of spoiler to say that the ending will be kind to the protagonist(s). Now, if you really want to enjoy the flick, it’s smartest to attempt to revert to the earliest of those pubescent years so that any images intended to be especially funny and/or offensive will come off as being funny and/or offensive if you’re past the demographic dates.

Above is how I used to think of teen movies. Now, Harold & Kumar Escape from Guantanamo Bay has allowed me to reach an epiphany: I just cannot pretend to enjoy those bad jokes in the manner I did when I was fourteen and any sexual reference provoked immediate fits of laughter. But wait, there’s a snag. I’m certainly not a teenager anymore, but I do remember how hysterical I thought SuperBad was last year. Maybe the real problem is here is that I have grown up to realize that there is a goddamn limit to the level of ineptitude I can handle, teen movie or no teen movie.

Let’s get the premise straight before we realize how things start to deteriorate. The movie picks up right where the first left off, and now road-tested stoners Harold (John Cho) and Kumar (Kal Penn) are preparing to visit Amsterdam for the dual purposes of international intemperance and meeting up with Harold’s potential romantic interest. Unfortunately, as they are on their flight, Kumar decides that he cannot wait to get to his destination and joins another kind of Mile High Club by way of sparking a fancy glass bong in a cramped airplane bathroom. Through some contrived confusion, Kumar is revealed with paraphernalia in hand (other passengers think he’s calling it a “bomb”), and the FBI thinks that he and Harold are part of a North Korea/Al-Qaeda cabal, resulting in their Gitmo post-haste imprisonment. There’s also a tacked-on subplot involving a frat boy stereotype of a bad guy and Kumar’s college sweetheart somewhere in there, but really, that is all you need to know.

Now, I implore you to reread that premise. Imagine the incredible amounts of hilarity that could come from witnessing such mindless prison shenanigans. Not DVD cover blurb “Hilarity!,” but actual madcap set pieces and bizarre humor that pays off. Too bad that the Guantanamo part ends within about ten minutes, with the rest of the movie pointlessly cycling through absurdly bad material culled from the worst of better comedy road trip movies like Planes, Trains and Automobiles, The Blues Brothers, Jay and Silent Bob Strike Back, and even (dare I say it?) Eurotrip. How incredibly disappointing.

You might wonder why I would hold this kind of movie to high expectations when it revolves around a pair of badly written pot-smoking novelties to begin with, but there’s true comedic potential lying within the duo of Cho and Penn. Cho is the ideal straight man, kind and intelligent but always boiling under the surface once Penn’s Kumar runs his mouth in a manner as snide and uncouth as he can muster.

Unfortunately, this flick’s characterization is apparently wholly expendable and the clichés within are used completely ineptly so that you know that no one is even trying to disguise it. Kumar’s primary rival (easily recognized as a slime ball without him having even to say a word) in particular is anorexically written, even for a cardboard cut-out. Two Daily Show alumni, Rob Corddry and Ed Helms, are entirely wasted as unfunny villains that never really do much of anything. Adding to this is the fact that there is no room for improvisation despite the anarchic storyline and pacing. Every line is delivered in the most scripted manner possible.

The only shining star in this wasteland of lost potential is Neil Patrick Harris, who plays a pastiche of himself (joining Chapelle’s Show’s Wayne Brady and The Office’s Creed Bratton in the Self-Deprecating Hall of Fame) with a kind of sincere confidence that is as enjoyable for the viewer to watch as it is for him to play. Funny enough, even though Harris has publicly come out of the closet since the last film, he remains more interested in a woman named Tits Hemingway than his traveling companion Jack Daniels. NPH could end up making a living from just playing this version of himself repeatedly if he had to. In fact, if a third film ever comes to pass (even though it’s probably best for nu-Cheech and Chong to just stay at home), I would prefer for Harris to receive top billing in Harold & Kumar Make a Futile Attempt at Escape from Doogie Howser’s Psychotic Chamber of Death.

I also wonder why this movie bothered to get an R rating instead of a PG-13 (which would have certainly allowed for more of that precious teenage audience). I mean, “fuck” is not an inherently funny word. While I adore profanity and can think of dozens of contexts in which said word may become instantly uproarious, it is necessary to attach some context, some emotion – hell, maybe even a joke with a set-up and a punchline – to make the word work over and over again. Sadly, the monkeys with keyboards behind this film are too busy high-fiving each other over the fact that a sequel to that White Castle movie got green-lit instead of making with the funny. (This reminds me of another disappointment: The protagonists do not consume any White Castles to conclude this movie.)

There are not enough bricks for me to bang my head against to make up for burning the $6.50 I did to see this movie in a theater with three other people. What’s probably worse is the fact that this flick suffers from the ugly phenomenon that a horrible sequel can sometimes be so bad that it can tarnish your joy for the original. The visual of Anthony Anderson dressed as a Burger Shack employee furtively warning his new friends to not consume the night’s special sauce because he and Pookie added a secret ingredient (“I’ll give you a hint. It’s semen.”) will never have the same raucous effect again.