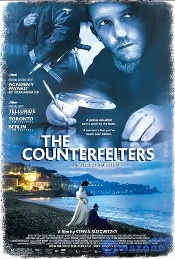 In a world obsessed with documents, Salomon Sorowitsch (Markovicks) is a king. He can make nearly anything – from an ID card to a passport – quickly, accurately, and undetectably. Needless to say, the rising Nazi powers are opposed to this, at least in their home territory, and he quickly goes from king to just another expendable Jew in a concentration camp. As the Nazi war effort falls apart, a desperate Himmler decides to flood the UK with counterfeit bills. He gathers the best printers and engravers in the camps at Sachsenhausen to perfect the art of making other people’s money. Commandant Herzog (Diehl) feeds the printers well, but never skips on the abuse or insults. Under this dark cloud, Sorowitsch’s desire to stay alive clashes with idealist Adolf Burg’s (Striesow) willingness to die for his principles.

As with all concentration camp movies, this is a brutal, bloody film with enough beatings, shootings, and nastiness to satisfy anyone. What sets it apart is the teamwork and camaraderie of Sorowitsch’s men as they conquer the difficult technical challenges of paper-making, printing, and engraving under constant threat of immediate execution. Initially, Sorowitsch’s motivation is proving he CAN duplicate the dollar, but as the film progresses, he seems equally interested in helping the others survive by delaying the Germans as long as possible. When the war ends, he’s alive and has a pocket full of fake bills. This and a beautiful woman (Dolores Chaplin) are enough to restore the dignity he lost in the camp.

This is not a film for the squeamish, but a fascinating study of how men can behave under pressure. The Nazis are as brutal as one would expect, but they maintain an honor and a dignity that comes from having a job to do, no matter how distasteful. “Albeit Macht Frei” (“Freedom Through Work”) reads the sign over Auschwitz, and to an unpleasant degree it’s true – having a job to do can keep you sane when insanity is all around you.