review by A. Remy; photos by Kristina Kauffman

Sunday’s Projekt Revolution festival in Hartford, Connecticut came in with a blast as pop/punk band Armor for Sleep took the stage, lead singer Ben Jorgensen donning a white and red striped shirt with a pair of bright red and black shoes to match. Despite their Revolution Stage first band pick-up and their name being minuscule at the bottom of the Projekt Revolution tour shirts, they didn’t seem to go unnoticed, compared to the traveling festival’s 2007 start up act, Madina Lake. 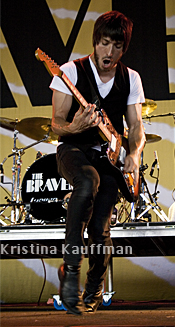 In contrast to last year’s line-up of MTV and fanatical teenage-attracting bands like My Chemical Romance and industrial/punkers Mindless Self Indulgence, this year’s acts drew a crowd that seemed more content and much more mature. After experiencing a mob littered with preteens in thick eye-liner and fishnet stockings, it was almost pleasing to see the dried-up old man at the bathroom entrance downing his fifth $8 beer. 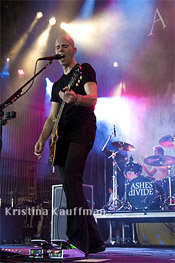 The excitement started as 10 Years’ set was greeted by rain that began in a downpour of grateful cheers and hoots. As soon as the first notes began, the rain came to a standstill and soon enough the only remnants left were the puddles and rushing waves of mud coming from the churning moshpit. Later, the mud became slicker and denser, the effect of a thousand frantically trampling feet. Alex Varkatzas, lead singer of metal hitters Atreyu, introduced popular single “Falling Down” by saying, “I don’t mean to curse you with this next song, but it’s pretty slippery out there.” Bodies fell and shoes got stuck in the mud, only to be ripped free and turned into flying objects.

The show progressed. “The Stone” by Ashes Divide echoed through the building and could no doubt be heard by the mass of Hartford residents and the CarMax down the road. The venue got packed during Busta Rhymes’ set just to empty right back out as The Bravery took their place. The sparse crowd seemed partially interested in The Bravery for the sole reason of making fun of them rather than singing along with them. Of the set, “Believe” seemed to be one of the few crowd pleasers. When the moment finally came for Chris Cornell, one of the main acts, to grace Hartford with his face, more people began to flood in, either for him or for the good spots they’d get for Linkin Park.

Chris Cornell opened and closed, playing acoustic renditions of “Like a Stone,” “Spoonman,” and “Doesn’t Remind Me” along with various requests made via text messaging from the audience. Fans even went the distance to throw requests up on stage written on wads of crumpled paper. Out of the blue, Chester Bennington took the stage to a roar of screaming fans to sing a duet of “Hunger Strike” with Chris Cornell. As the Cornell set neared its death, the ever-so-familiar tune of “Black Hole Sun” beat from the drums and rang from the guitars. The crowd went wild with ecstasy. At the height of the song, Cornell jumped from the stage and crowd surf. Unlike the normal crowd surfers, tossed like a useless sack and left to tumble wildly over people, he was carried carefully, slowly over the crowd. His body was steadily and dreamily carried from left to right, never once faltering the chorus of the song, “Black hole sun, won’t you come, and wash away the rain?” repeated over and over until he was pulled from the crowd by security on the opposite side of the stage that he left from. He went down the barricades, shaking hands and serenading everyone he touched with the strongly simple words of the song. Fans handed him more requests and birthday balloons in celebration of his birthday that day.

The stage once again emptied to be transformed yet again to an entirely different set. High and elaborate platforms rose up across the entire whole of the stage space. Fake drums of toxic waste with biohazard symbols plastered on the sides were placed randomly on stage. At the same time, the lights were being adjusted from yellow to purple and green, giving the stage the effect of a horror movie land gone victim to a nuclear holocaust. The lights about the crowd dimmed to black, but the stage stayed lit all the same. Walking out onto the stage were three men, all artistically doused from head to drumstick in glowing neon body paint. It seemed as though Linkin Park decided to give the Street Drum Corps aguest appearance. The beating of the drums and the intense rhythms were nearly enough to give you a heart attack. 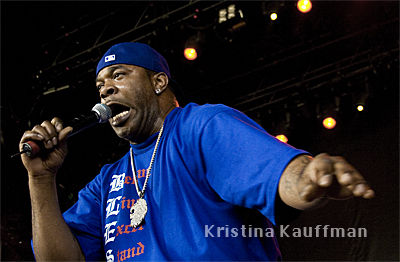 Off each side of the stagem, the band members of Linkin Park were visible, guitars audible. Rob Bourdon, long-time drummer, snuck to the stand and began to play his own drum parts. It was already apparent what the opening song was. “One Step Closer” was sung louder by the crowd than by the band. The crowd was maniacal, jumping and yelling every word crazily. Even resurrecting The Doors’ Jim Morrison wouldn’t add up to this. The venue was not nearly big enough for the heart of Linkin Park fans.

Though at times the set seemed rushed, the show was faultless. Chris Cornell sang the second half of “Crawling” alongside Chester and Mike and was received more birthday largesse with cake and balloons from the band and a crowd chorus of happy birthday. 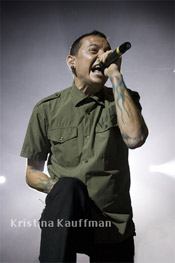 Despite its “unrockly” sound, “We Made It” was performed featuring Busta Rhymes and Alex Monroe of Ashes Divide on the keyboard. The show closed after one encore, plenty of miscellaneous musicians, two Fort Minor clips, one verse of “Hands Held High,” Rob Bourdon’s drum solo during “Bleed It Out,” and, never to forget, a crowd screaming for more. Drum sticks and guitar picks and sweaty towels were falling from the sky. No one wanted to leave.