Stephen Malkmus and the Jicks

Stephen Malkmus and the Jicks

Matador may be touting Real Emotional Trash as a California-feeling record, but conjured images of Annette Funicello jiggling her old-wave bikinied hips on some blanket on some beach, and shirtless Red Hot Chili Peppers californicating – all lovely – don’t seem a fitting “feel” for the agglomerated sophistication of the most talented group of musicians I’ve heard in years.

I’m the first to admit a soft spot for nostalgia, and Stephen Malkmus’s latest album smacked my head with a hefty slab of Pavement that I hadn’t felt since the winter of 2002, when Terror Twilight lent its soundtrack to my saucy life. But that was the first take; another month of play (review deadline? what?) made the presence of Janet Weiss, Mike Clark, and Joanna Bolme – the Jicks, my friends – evident as hell. 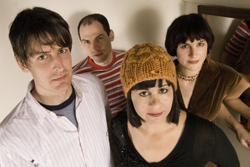 A sensational new addition to the band, drummer Janet Weiss (Sleater-Kinney, Quasi) drew my attention early because I like her (and she’s hot), but I soon found myself concentrating equally on Clark’s keyboard, which provides gorgeous counter to Malkmus’s perfect guitar, and on Bolme’s confident bass – beautiful. No song on the album is less complicated than any other. Tracks transition from lyrical lament to playful bounce to full-on jam (like those thirty-minute episodes you lolled your head to, eyes closed, at college stoner parties, only damn! so good), sometimes all in the same track.

A good example of the album’s intricate assembly is “Hopscotch Willie,” sad tale of the wrongly accused… “You can’t blame me for my guilty face / It was a gift from my mother, my father / In place of all the love they should have given / They just left me with this dirty DNA / That makes you think I’m the one you want.” The song’s almost jangly intro leads into a long, fat jam, slows down to a doleful piano plink, then speeds up again, leaving you chanting “Panting like a pitbull minus the mean” for hours.

“Gardenia” is the shortest and quickest-moving track, and the one that makes me laugh every time with its opening line, “I kinda like the way you dot your j / With giant circles of naïveté.” Makes me think of dingbat cheerleaders (no offense to the plethora of brainy pom-pommers among Ink 19’s audience). “Out of Reaches” and “We Can’t Help You” are probably the most melodic tracks, though the entire album – no matter how disparate its lyrics seem – flows like a story you can’t put down.

Pavement and Quasi fans are bound to dig it. Even folks who, like my friend Stevie C, don’t have a clue who Malkmus is but appreciate great musicianship and a good set of liner notes, will want to get their hands on Real Emotional Trash. It’s genius. It smells good. It’s fucking brilliant.