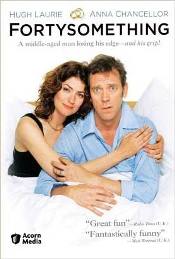 Dr. Paul Slippery is having a rough time. He can’t remember the last time he had sex with his wife, his three sons pay no attention to him, he despises one of the doctors in his practice, and he thinks he can hear people’s thoughts. Trust Hugh Laurie to take some of the oldest sitcom clichés and breathe new life into them with Fortysomething, a lighthearted look at some of the serious issues involved in long-term relationships.

Hugh Laurie has been one of my favorite actors for many years now. He can seamlessly step from comedy to drama, is a very talented singer and musician, and as evidenced by the Gregory House character, is a master of dialect and accent. In Fortysomething we also get to see how he works as a director. When someone is as talented as Laurie is, there is a level of expectation going into a new venture. Perhaps that is unfair, but in the end I was underwhelmed by Laurie, the director. There was nothing wrong with these episodes, but also nothing particularly impressive. Perhaps it was because he was directing a show he was also starring in, causing him to have split attention. Maybe if he had removed Laurie-the-actor from the equation, things would have been more focused for Laurie-the-director. I will say that, unlike some actor/directors, he did not use his position to inflate his character to the detriment of the ensemble. On the contrary, the rest of the cast received most of the best lines, while Laurie was comfortable playing the fool.

About that supporting cast, Anna Chancellor (The Hitchhiker’s Guide to the Galaxy) is excellent as Estelle Slippery. She is beautiful and confident when dealing with Paul, and yet manages to show her vulnerabilities and insecurities when he is not around. Peter Capaldi relishes chewing the scenery as one of Paul’s partners and his nemesis. The rest of the supporting cast (the Slippery sons, their various girlfriends, etc.) will set you on a game of “Hey, don’t I know that face” if you watch very much British television.

An odd niggling aspect of the show is Dr. Slippery’s “telepathic” abilities. As the show started, he thought he could read other people’s thoughts, most prominently his wife’s. This was an unexplained but semi-important point of the first few episodes, as his interpretations of thoughts he believed he was hearing would influence his actions. As a viewer with patience, I was ready to wait a while for an explanation – was Slippery actually psychic, or was he imagining things – but it never came. After a few episodes, the device wasn’t mentioned again, so I assumed the creators decided it wasn’t working and moved on. But then it popped up in the final episode, again without any explanation. A minor annoyance, but it doesn’t ruin the overall experience.

My only other complaint is the length. While I am always a fan of letting comedy have room to breathe, the episodes in Fortysomething are almost fifty minutes each. The result is that most of the episodes feel padded. They begin and end strong, but consistently lag in the middle.

The DVD set contains two discs with all six episodes of the series. The video and audio transfers are fine. Special features are sparse, with nothing but cast biographies and a text interview with Hugh Laurie. Fortysomething is an odd bit of work. We have some excellent performances by some top actors, new slants on old comic clichés, and an interesting combination of comedy and relationship drama. However we also have some uneven directing, pacing issues, and unresolved plot points. Any fan of Hugh Laurie’s work or of quirky British comedy should definitely sample a few episodes of Fortysomething as a rental.