Philippe Petit made ’70s art history when he strung a wire between the two brand-new World Trade Center towers. For 45 minutes he strolled on this wire 1300 feet above the street wearing bell bottom slacks. Using archival footage, dramatic reenactments, and first person interviews with the perpetrators, director James Marsh makes a gripping documentary destined for Film Festival obscurity. That’s a shame, Petit pulled off this performance art stunt with the planning and luck of any of the greatest heists of all time. 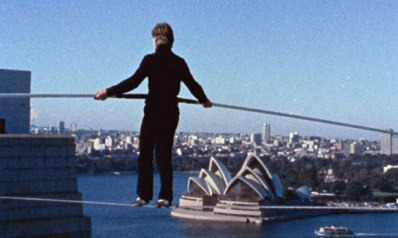 As a young man, Petit saw an article announcing the towers while sitting in a dentist’s office waiting to get a tooth pulled. The towers obsessed him, and he determined to do something stunning with them. Entering into a life of street mime, he busked and learned wire walking. His first triumph was walking between the towers of Notre Dame in Paris, and then he tackled the Sydney Harbor Bridge. The WTC was a tougher nut to crack, security was always tight there. It took a combination of insider help, fake IDs, and chutzpah to pull off this technical miracle.

Petit’s story is fleshed out by interviews with his motley crew of helpers. They don’t seem all that friendly with each other, and most of them seem to be in it as an anarchist prank. The movie has a bittersweet feeling; none of the relationships that got the wires up there persisted. They evaporated like any live performance, and now with the towers gone, the only things remaining are some memories and this film.