Smoke and chatter filled the air while we all waited about two hours for the first band to start. Kap10Kurt, this two-man band from NYC, pumped the crowd up with its techno/pop rhythm. It was very catchy and the audience went crazy over them. The energy they and every single person in that room had was enormous.

After a few songs the crowd was hungry for more. The next band, Funeral Party, was ready to play. I thought they were going to be techno and pop like the previous band, but nope! The three-man band took me by surprise, and probably everyone else too – an alternative rock band. I fell in love with their music instantly. Again, they provided excellent energy throughout their set. However, the audience didn’t seem as energetic as they did with Kap10Kurt. Nonetheless, it was a great performance by these three guys. 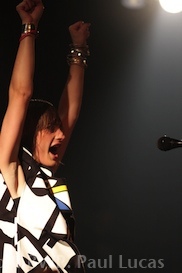 Next was YELLE. As the band members set up, the crowd got a bit antsy. There were a bit of technical difficulties with the mics. The production manager was about to lose it, rushing back and forth to the stage and mixers table. After the bugs got squeezed out, seconds turned into minutes and minutes to hours. The crowd started a chant, “Yelle! Yelle! Yelle!” This occurred about five different times. It took 15 minutes, if not more, for the band to get on stage. Once the audience laid eyes on Yelle, things went out of hand. It reminded me of when I shot Hannah Montana (yes, I took pictures of that girl in concert, unfortunately) and 12,000 girls were screaming; it was pretty much same deal with this concert.

Yelle, who is the lead singer, wore crazy sparkly spandex with bright orange shoes and a crazy dress/blouse or whatever you guys call it. She had so much energy it was insane, comparable to the Energizer bunny and then some. The set was awesome, with the audience going insane for every nanosecond. During their song, “Je Veux Te Voir,” Yelle told the audience to sing along. This was a major FAIL; apparently none of the audience spoke French. After three attempts, Yelle sadly gave up on the audience. 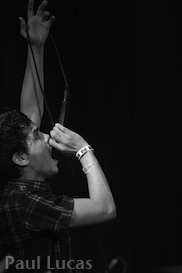 I was laughing my ass off through the whole situation. I kept spotting people with this paper mask. I found later that on YELLE’s MySpace page, there is a PDF file and instructions on how to make one. The ad says, “Build your «Ce Jue» Masque to get a kiss from Yelle after the show.” Damn it, I wanted a kiss! YELLE was a huge hit at The Social’s sold-out show in Orlando. Kids were talking about the set as they were leaving, and this pop/techno/club band has won the hearts of many Americans of all ages. I personally can’t wait to see them again!