For the sixth straight year, DeciBelle festival celebrated the progressive work of women in film, music, literature, and activism. The festivities kicked off on Tuesday night around Chicago’s north side, but my submersion began on Friday at the Debonair Social Club and ended on Saturday night at the Empty Bottle. During those two days, a film about the Seattle punk band The Gits, Midwest grrl hip hop, and an unlikely push for the Obama campaign collectively challenged me to think beyond just being entertained and amused. 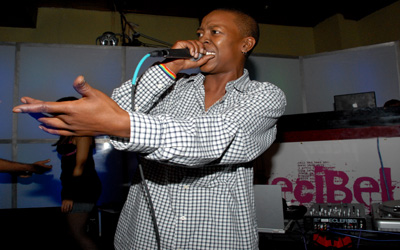 On Friday night at the Debonair Social Club, two fiery rap acts dished out their own versions of riot grrl. Detroit duo Mz. Jonz swaggered on stage, grabbed its mics, and began volleying vivacious verses punctuated with grins and call and responses. Unable to resist, the crowd surged along with the duo’s carousing country flow.

After a five-minute break, Chicago rapper Jessica Disu (aka FM Supreme) cranked up the intensity and dove into a freestyle rap. Sweat dripped from Disu’s face showing just how hard she was working. With each passing beat and rhyme, I was jolted and surprised as she blazed through tracks from her Beautiful Grind mixtape. Though the mixtape does demonstrate her lyrical prowess, it doesn’t showcase her live electricity. Her eyes were like sticks of optical dynamite, exploding with each verse and punch line. And when the time was right, she extolled the crowd to “Get your C’s up!” and show some Chi City love. It was a supremely soulful end to Friday night. 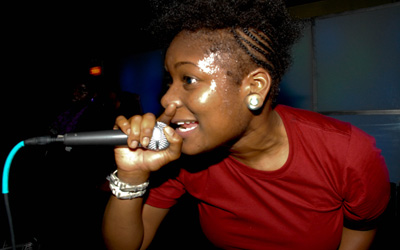 On Saturday night at The Green Lantern Theatre, I watched a screening of The Gits and learned more about the story of the Seattle punk band. The documentary film examines the band’s beginning and then traverses through the tragic details of their demise following the rape and murder of front woman Mia Zapata in 1993. This Chicago premier also included a Q & A session with director Kerri O’Kane and producer Jessica Bender fielding questions afterward.

The Gits is a collage of family and friend interviews mixed with archival concert footage. It’s inspiration, grief, and hope all rolled into one. The Gits’ story has many angles, making it a difficult story to tell in roughly ninety minutes. Nevertheless O’Kane and Bender overcome this obstacle by approaching the writing and production with respect, reverence, and foremost, as fans. “It was hard to get the access to her personal journals,” they explained when asked about conveying Zapata’s dynamic personality. “We felt the footage proved our story and helped to tell her and the Gits’ story well. We wanted to make sure we made a movie that focused on the music and not so much on her murder.” 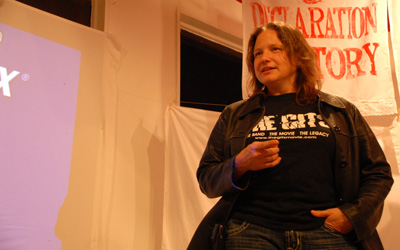 Bender explains, “During filming it was a struggle because we were constantly faced with the dilemma of focusing on either the Gits or Mia’s murder; because each impacted the other in many ways. We wanted to focus on the music and gain the trust of the band and family members to tell the best complete Gits story we could.”

“Our mission was to help you learn about [Zapata] and the Gits. What happened to Zapata was new to us and we tried to make a film that feels like how we felt as we discovered who the Gits and Zapata were,” said Bender.

The film succeeds at communicating a love for the Gits’ music, inspiring you to discover them as O’Kane and Bender did. The film handles the emotionally charged social undercurrents of violence against women gracefully and doesn’t overshadow the power of the Gits’ music. It’s a promising film for the first-time director and producer team that will hopefully grow legs in the coming months.

Moving from punk rock docs to live music, it was on to the Empty Bottle for the week’s finale. 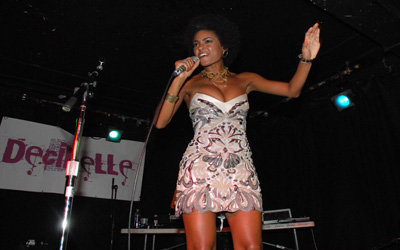 “We can perform to an empty room, that’s okay,” said Miami’s sassy and sexy soul diva Lady Tigra as she humorously embraced the unfortunate obvious atmosphere of low attendance. But that didn’t stop her. She worked with what she had, transforming the scene into a formidable celebration bumping with electro-funk and neo-soul. The set peaked when the crowd raced on stage to join Lady Tigra, helping her belt out the chorus to a new, and timely, song “Black First Lady,” a soulful Obama tune, not for the popular Illinois senator, but an ode to his wife Michelle.

In a year where the Obama support pours from all corners of the stage, this track has the least amount of political punch and instead wins you over with pure heart. Regardless of political alliances, the song ranks among the best Obama anthems. Even though there weren’t many there to enjoy it, it was still a proper ending to a week of estro-jamming, a perfect ending to a festival designed to put the ladies first. And I’m still humming the song’s soulfully catchy chorus, “Black First Lady/ First Black, First Lady.”