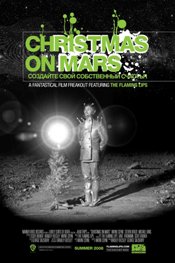 It’s creepy, it’s high concept, and Christmas on Mars will leave you with the sort of weird confusion you feel after watching Japanese television – “WTF was THAT?” Here’s the plot, which I cribbed from the Flaming Lips’ Web site: In 2055 Mars has been colonized, but things aren’t going well and the crew is stuck there. They convert their spaceship, which looks like an abandoned grain silo, to living quarters. A gorgeous woman is producing the first baby in space using a weird device she plugs into her belly and the birth is timed for Christmas Eve. Major Syrtis (Steven Drozd) packed along some holiday lights and a Santa suit to cheer people up, but when the oxygen generator blows up, depression sets in. The crew starts hallucinating a vagina-headed Nazi Marching Band crushing the child. Then a mysterious green Martian (Wayne Coyne) appears and sort of saves the day. He mysteriously repairs the broken generator and even gets the snow machine to work before riding off into the sunset.

I hope I’m not making this plot sound very coherent; it’s apparently not intended to be a linear story. The film is dark and creepy and the sets look one notch below the MST3K “Satellite of Love.” PVC pipe and drainage tubing and cool whip tubs are used in abundance, and automotive air filters are the spacesuit helmet-locking mechanism. Besides Syrtis, no one has much of a name, but the introduction credits are pure 1965 microdot brilliant and the dialogue is packed with brilliant quotes like “I’m telling you, your fucking Santa Claus is dead” and “We’re trapped in a machine that is slowly dying.” The movie feels like Eraserhead, but bits of 2001, Barbarella, and Dark Star infect the film. The visuals are dark and mostly black and white with only slight flashes of color for the Martian, and if it weren’t for Sexy Mom, there’s nothing much pleasant to contemplate on Mars.

Christmas on Mars is clearly a labor of love, the sets took seven years to build and the film has an uber-DIY feel that dooms it to film festivals and college entertainment committee screenings in that skanky lecture hall in the English building. While there’s a holiday theme lurking here, Christmas on Mars is no feel-good film. Instead, it’s claustrophobic, inexplicable, and the sort of film you MUST be familiar with if you spend any time hanging out with the socially maladjusted, throwing 12-sided dice and debating which Kirk is best.