How Dare You, The Swellers

After a crazed, drunken weekend at Gainesville’s The Fest, what better way to close out the long punk rock party than to speed south on I-75 for one more show at Orlando’s Backbooth? Still riding out the high of three days of mayhem, bands and fans alike were clinging to the last drops of adrenaline that pumped through their tired veins. 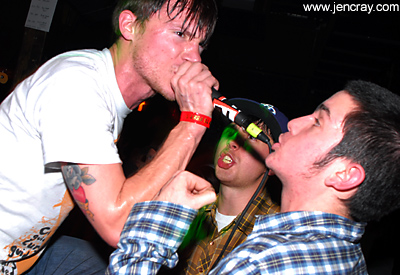 Having missed The Fest myself, catching this psuedo-after-party on my home turf was the next best thing. Even though I took off before headliners A Wilhelm Scream played, the three bands I caught were enough to not only satisfy my need for some modern age punk, but to reassure myself that an entire weekend of it would have been a bit too much to tolerate. This new breed of hybrid bands – the ones that slop together virtually every sub-genre of punk that has come before – don’t have the same vision or inspiration as the bands who define punk rock. As open minded as I allow myself to be when listening to this cross section of bands, I still succumb to moments of disappointment when listening to so many that sound like hundreds who came before them. 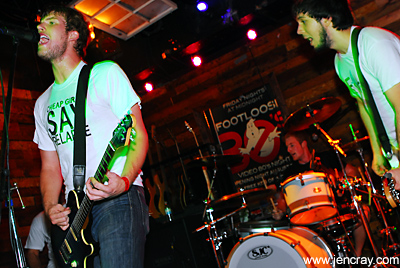 It was because of this that I can only say that The Swellers were as good as any other band who’s bent on replicating Green Day. Their songs were short, their melodies catchy, and their energy was inviting, but there was nothing about the Michigan quartet that was memorable. Still, I do enjoy pop punk and these guys were happy to deliver it. I just wasn’t as blown away by their set as some of the younger kids in the crowd who were on the verge of pissing themselves when they walked in and found that the band had been added to the bill without notice. 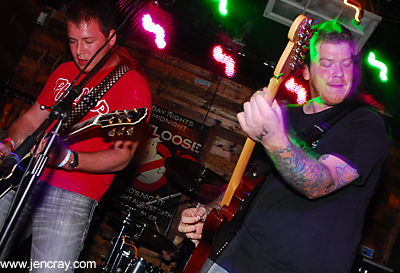 “This was the best show we never played,” a grinning vocalist/guitarist Nick Diener announced.

Also grinning were the boys in Orlando’s How Dare You. The night also served as their CD release party, though there was little promotion about this from the band other than to say, “We have CDs for sale.” The young band’s performance was both sonically and visually a step up from the one I saw them give just last month – when they played with Gatorface and Static Radio NJ – but was still a step away from being anything other than just one more punk band. Much of the band’s power fell on the shoulders of guitarist/co-vocalist Elliot Meyer, and if the rest of the guys could muster up the same sort of enthusiasm onstage, they just might be on to something. A Jawbreaker cover blended easily into their set. 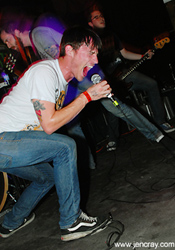 This musical version of a Polar Bear Club isn’t quite as hardcore as the crazy Eskimo-blooded men who get their kicks by diving into icy cold waters, but they have more than enough gusto to hold their heads high in the pool of new punk… and they earn points for having an interesting band name.

Their set, like their music, was a study in the kind of crowd/band interaction that has always played a crucial role in the hardcore scene. While the audience was too wiped out to start up a friendly pit, it didn’t shy away from crawling its way toward vocalist Jimmy Stadt and sharing a scream into his mic.

For his part, Stadt planted himself on the lip of the stage and backed up only once in awhile to steal a sip of water or throw out a high jump. He was a man of the people, preferring to grab the audience by the lapels and reel them into the performance – and the audience was willing. 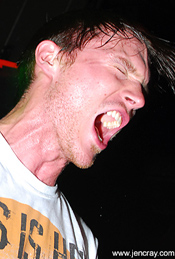 With only two albums to pull from and thirty minutes to play with, the set-list nailed down just about every song from the band’s most recent Red Leader release Sometimes Things Just Disappear. The album is competent, but the live show is something much better. As is the case with most bands of this nature, their aggression is better felt in person – when the singer’s spit is being sprayed onto your forehead. It’s gross, but makes the music more personalized.

Really, what all of these bands are lacking are some well thought-out tunes. My advice to all of these young, Internet-bred bands is to go back into the garage, hammer out a sound, and write a couple dozen songs before you even think about taking your band to the masses. Otherwise you’re bound to get lost in the shuffle.