People in Planes, Rabbits With Glasses

All refugees of grunge, dig out your old flannels and angst because The Toadies have quietly reunited. With a brand new album, No Reservations, under their belt and seven years worth of dormancy making them antsy, the band – whose 1994 debut, Rubberneck, may have graced your record collection during the Clinton years – are on the road and bringing grunge back. Hallelujah! 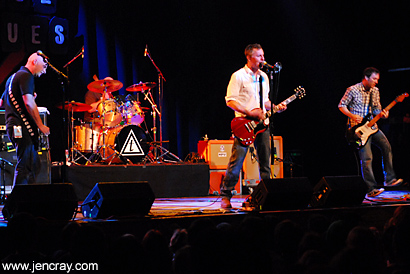 Rabbits With Glasses, an Orlando rock act since 2004, lay the foundation for an evening steeped in the music of Rock’s past. A mainstream radio-ready quintet, the band builds its easy melodies atop a foundation of slightly pscyhedelic grooves. At the forefront stands Jamie Sparks – a soft haired, sweet faced front man with an unpredictable power in his vocal chords. Their set ends as they just seem to be warming up, and I make a mental note to catch them again in the future. 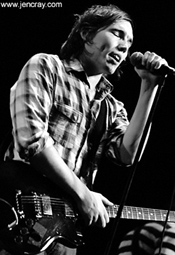 Gareth Jones, vocalist for South Wales’ People in Planes, has a couple of personalities swallowed up in his gut, and when he sings, they do battle. It’s his vocal prowess as much as the band’s soaring music that brings around a crowd that was otherwise ignorant to their sound. There’s a sexual rawness to Jones when he tackles songs off of the band’s 2006 debut, As Far as the Eye Can See. “Barracuda” heats up the room in a way that some of the newer songs do not. The new material, on this year’s Beyond the Horizon, has a softer polish (thanks to the production of Our Lady Peace vocalist Raine Maida) which I’m still easing my ears into. Hearing these tamer bombs in People in Planes’ arsenal performed live gives them a much needed push. “Pretty Buildings,” “Vampire,” and “Last Man Standing” (with guitarist Peter Roberts taking over on lead vocals) suddenly find a home inside my head, at once combined with the smells, hot lights, and crowd vibes provided inside the packed bottom floor of the House of Blues.

People in Planes are bigger than an opening act. They, and the audience, just haven’t realized it yet. 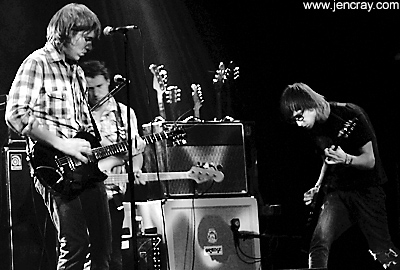 Back in the ’90s The Toadies fell between cracks on the sidewalks of Soundgarden, Nirvana, and Alice in Chains. Arriving on the scene a couple years late, they got lumped in with Bush and Silverchair as a second-generation grunge act that was seemingly riding in on the coattails of Kurt Cobain. Following the same formula – murky guitars, howling vocals fraught with angst, and albums borne out of punk rock and metal – they were easy to dismiss, yet they found a modest hit with the song “Possum Kingdom.”

Fourteen years later, the pointless hierarchy of who came first behind us, the band just sounds like good music and a simpler time. The crowd at their Orlando show is hungry for music from a pre-MySpace era, and very quickly a nostalgic mosh pit blossoms. It’s a friendly dance of shoulders and arms that feels more pure than the aggro terror pits of modern times. Crowd surfers smile wide as they get passed over heads, and onstage The Toadies beam with surprise at their newfound validation. 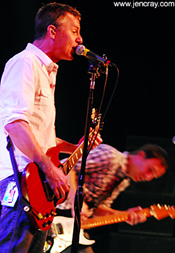 As authentically old as the band’s new stuff sounds, it’s the old goodies that get the blood pumping, and thankfully they run through almost all of Rubberneck. “Mexican Hairless” and “Backslider” are tossed out immediately in the set, and soon “Quitter” and “Away” follow. The big hits, “I Come From the Water” and “Possum Kingdom,” are saved for those who stay for the whole set and when they are played the audience ignites even brighter.

Vocalist/guitarist Todd Lewis does not have a flashy presence onstage. He doesn’t have shaggy hair to fling about, he doesn’t thrash against his guitar while he bangs out power chords, and he doesn’t stage dive (at least not in Orlando). He stands, steadfast, behind his pair of microphones (one is an old, silver radio mic’ that distorts his voice slightly) and belts out moody rock that makes the hair on the back of my neck stand on end. There’s no need for flash when your voice is strong enough to hold court like his.

At the show as in the car ride home, modernity was breathed into the music of my childhood and I temporarily forgot about my grown-up problems.