Rise Against is currently heading up an all-star tour alongside marquee-level bands like Alkaline Trio, Thrice, and The Gaslight Anthem. It’s their biggest, and best, tour to date and it’s selling out shows all over the country. Hours before they were set to take the stage at Orlando’s House of Blues, I sat down for a chat with the band’s drummer Brandon Barnes on the Chicago punks’ immaculate tour bus. 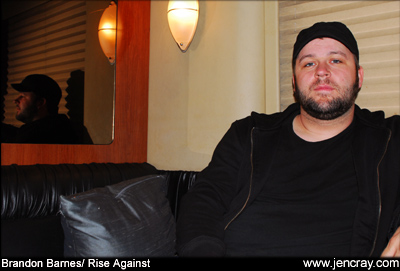 Let me ask you about this amazing lineup for the tour. Did you guys play a role in choosing these bands?

Yeah, we always have total control over the lineup. The list of bands that we want to tour with, and can still tour with, gets shorter and shorter each year, but this one just came together. It’s been a great time. We’ve known Thrice and Alkaline Trio for years, and have toured with them, and the Gaslight guys are great and their band’s amazing. It’s definitely one of the best tours we’ve ever done.

It’s a unique one because everyone on the bill can do their own headlining tours. Does that create some friendly competition on the road?

Yeah, there’s always friendly competition, ya know? It’s great. The kids are there (at the show) from the first band, all the way through. Usually, if we headline, kids file in throughout the night, but now the house is already packed even for Gaslight. That’s been interesting to see – every band gets the full crowd.

When you play the new songs off of Appeal to Reason right up next to the old ones can you hear the evolution in your sound?

Especially on this tour, yeah. We’re playing some stuff off of our first record and it sounds like a completely different band even though it’s still Rise Against. We’ve been together so long, and we’re better at our instruments and better at songwriting, so it’s evolved into something.

You’ve also been through a few guitarists over the years. Does your approach to drumming change as a new guy comes in?

Not too much, but every time we get a new guitar player it – obviously – has an effect on the band. Zach’s (Blair) a perfect fit because he picks real hard and plays real hard, which is good for the drums. He plays more like an old punk guitar player, he’s got a lot of power. It’s been good having him in the band. 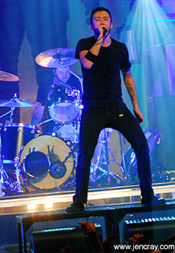 He did some time in Gwar, which I can hear a bit in the guitar parts on this record.

Yeah, yeah! He can play some metal! We all sort of grew up listening to metal.

The band has always been politically involved whether it be talking about the war, the importance of voting, or animal rights. It’s something that you are all very passionate about, or does a lot of that stem from Tim (Mcllrath)?

No, we’re all into it which is probably why we can all still hang out together after all these years. We have the same politics, we’re all vegetarian… we all enjoy it, it keeps the band new. It’s fun to use the fact that we can reach out to all of these people in a good way, and try to educate people on animal torture and animal rights, educate them on the election and get them to vote – no matter how they’re voting. Using that (power) wisely is fun.

With the elections a week away at this point, is that affecting the set list each night?

Well, we’re playing “Hero of War,” which is an acoustic song on the new record. It’s powerful – it’s true stories from soldiers about things that these poor young kids that are going over there are getting themselves into. Sometimes we’ll get negative reactions to it, we’ll have someone come up and say, “you hate my cousin who’s in the military.” We don’t hate the military, we’re not anti-military. The song is true stories. These kids join the military, and are sort of brainwashed and they become these soldiers. Most of the soldiers do a great job, but some of them end up in these situations where they do horrible things that they’re going to regret for the rest of their lives. We play that song every night.

We also have the IVAW, Iraq Veterans Against the War, at some of our shows. We’re hoping that will, maybe, help kids figure out who they want to vote for. You know, you’ve got a guy like McCain who wants to be over there for 50 more years. Maybe they’ll think about where they want this war to go.

Is it hard, mentally, to play a song like that every night?

Let’s talk a bit about the “Re-Education (Through Labor)” video. Is the violence in that video (which includes groups of kids setting a city on fire) metaphorical, or are you channeling your inner Tyler Durden?

The video is about what happens when you leave people no options. Obviously we’re not saying to go out, build a bomb, and blow shit up, but when there’s peaceful protest for years and years and the government just ignores it… the government is supposed to be here to help us and to steer us in the right direction and they’re not. They’re failing us and ignoring the masses, so it’s a video about the crazy things that people do when they’re left with no options.

Do you think that a revolution, not necessarily a violent one, is long overdue?

Yeah, for sure. I don’t know who that revolutionary will be. Obama is a step in the right direction, but I don’t think he’s perfect. I think it’s time for a drastic change… This Iraq war has been long, it’s one of the longest wars in our country’s history. We’re fortunate enough to go overseas and we talk to our fans in Europe, and other places, and they just look at us (U.S.A.) in such a different light after the whole Iraq thing. We’ve just gone over there and fucked it up so bad. 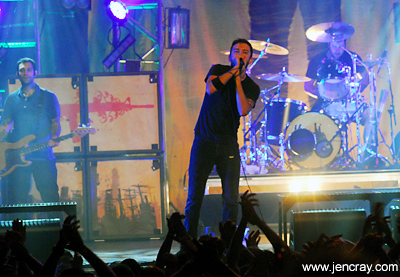 On a lighter topic, several years ago you portrayed Black Flag in the film Lords of Dogtown. How did that come about, and what was that Hollywood experience like?

The woman who directed the movie (Catherine Hardwicke) polled a bunch of kids in the Southern California area to see who they’d like to see get that part, and we were picked. We know Bill Stevenson – he does our records and played drums with Black Flag for a little bit, and we listened to Black Flag when we were kids – still do, really. That was a cool opportunity. If we were gonna do a movie, which we don’t ever do stuff like that, it seemed like the perfect one to do.

It was cool to see how those movies are made, it was a good experience. I’m in the part for, like, one second (laughs).

Are you comfortable with your increasing popularity, or are you nostalgic for the days when you were just a struggling unknown band in Chicago?

Well, the day our record came out we did a secret show in Boston and there were about 150 people there. It was a tiny room, just packed in. Those shows are always fun, but I also love the big shows. It’s been interesting. It’s been so gradual though, we’ve gotten bigger over a period of eight years while riding around in a van, touring everywhere. It’s been comfortable. We still love the small shows though and will continue to play them whenever we can, just for fun.