The Psychology of Joss Whedon

The Psychology of Joss Whedon 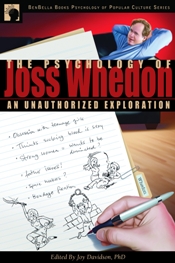 Joss Whedon has a huge cult following. I do not belong to the cult, but its members are many and they love this guy. So in the name of due diligence, I Netflixed all of Firefly, his 9-episode tangle with network television, and its subsequent movie, Serenity. I thought it was pretty cool – not cult following good, but enjoyable and thoughtful. I also spent too much time watching episodes of his long-lived WB series Buffy the Vampire Slayer, which followed the 1992 movie written by Whedon but evidently not loved by him and hence seemingly ignored by his fans, and not mentioned once in The Psychology of Joss Whedon. Maybe Joy Davidson should have edited an essay about the collective mob’s mass ability to forget an unwanted memory. After spending hours and hours in Sunnydale I came to the conclusion of … uhh. I see what the appeal of Buffy is, it’s fun and sometimes witty, but I’m no convert. Yet I appreciate and admire Whedon for having brown coats all over the internet and fans organizing a campaign to get a failed television show made into a 60 million dollar movie.

On to the book, The Psychology of Joss Whedon. It is edited by Joy Davidson. Ph.D, who has a long a varied resumé and obviously knows her stuff and loves Joss Whedon. The book is filled with 15 essays about the psychological issues of Whedon’s large cast of characters in his “Whedonverse,” as so many of the writers refer to it. The idea of doing psychological studies on characters is an interesting one, but unfortunately it was not interesting enough to hold my interest for 215 pages. I enjoy BenBella’s Pop Smart series, but the one or two essays featured in most of the series’ books are enough to fill the need for psychological insight. Too many of the essays deal with similar themes and quote the same episodes of the three television shows. The writers of the essays are mostly professors and it comes through in their writing. Usually the first part of the essays are used to teach you about the particular areas of interest the Ph.D’s are experts on and teach the layman about the terms and theories that they then apply to Buffy, Angel, or Mal. This tends to make the articles dry and boring in the beginning before they pick up in the end. There is valuable insight into the characters for members of the “Cult of Whedon,” but I feel that even some of the most dedicated fans might grow weary trudging through some of the essays. I still recommend that Buffy fans patronize BenBella, just pick one of the other five books they’ve published about Buffy, Angel, and Firefly.

If you’re one of the many psychology majors I know currently working in retail (along with us English majors), you’ll get a kick out of this book, because psychology is your wheelhouse and the various schools of thought and conditions mentioned in this book will remind you of all the papers you wrote between drinks in college. In closing, I’d recommend most books from Pop Smart – unfortunately, this isn’t one of them.