The Boy In The Striped Pajamas

The Boy In The Striped Pajamas 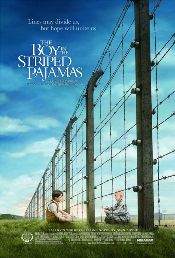 Just as the Holocaust slowly crept up on Germany, this story sneaks into your brain and holds you till you can’t watch anymore, yet can’t turn away. At first everything seems normal, but fifteen minutes in you’re pinned down and you’re not sure where it all went so wrong. High-ranking Rolf (David Thewlis) has received a big promotion and a transfer to the middle of nowhere. He removes his family from charming prewar Berlin to a remote villa and a mysterious job. His eight-year old son, Bruno (Butterfield), and his wife (Vera Farmiga) miss their friends, but his 12-year old daughter, Gretel (Amber Beattie), perks up when she meets handsome Aryan Lt. Karl Cotler (Henry Kingsmill), and gets private lessons in the evils of Judaism. With few others around except some odd “farmers in pajamas,” Bruno wanders off and meets little Schmuel (Scanlon) through the electrified fence. Neither understands why the fence is there, but Bruno brings food and Schmuel tells him stories. As time goes by, Bruno begins to see the lies his family tells, and breaks into the camp to help Schmuel find his missing father. This is not going to end well.

The Boy In The Striped Pajamas mixes beautiful cinematography, great acting, and a compelling story you’ll only want to watch once. This film is Oscar bait, and ought to win that plus a Silver Bear, a Golden Palm, and a dozen other film fest awards.

The attitude of the Germans to the gassing varies. Commandant Rolf (we have no last name for the family) seems to view it as a fact of war – the Jews are an enemy to be exterminated – and the fact they are unarmed German citizens just makes the job a bit easier. He does show some unease – this is a deeply classified operation and not for his family to understand. Lieutenant Kotler (literally “shitter” in German) displays the stereotypical Nazi hatred, and Gretel parrots whatever she hears, showing how easy it is to not think for yourself. She has no experience with Jews; hating them is just the cool thing to do. Only the unnamed mother expresses any remorse, and she’s shuttled off to Heidelberg lest she embarrass her husband’s career. Bruno wavers – he’s lonely and desperately wants friendship, but he sells out Schmuel in a heartbeat when confronted by Kotler. High-minded words make us THINK we will do right in a pinch, but we are all just part of a herd and go with the majority.

Director Herman and Production Designer Martin Childs found chilling, evocative locations, from a glorious Art Nouveau mansion Bruno describes as “the best house ever” to a frightening cast concrete Futurist house, curiously decorated with Bauhaus light fixtures and black, prison-like balustrades. Little touches like the boys’ games in Berlin to Gretel’s pop posters of Hitler all subtly guide us on our way to a horrific ending. As the old saying goes, “Don’t worry, it’s only a shower.”

The issue with this movie is its horribly dark ending. The story demands it, the film demands it, and while a director must serve his story, I’m growing tired of gruesomely dark entertainments. The new century has started on a down note and the arts community has taken to staring at its navel. What they see is Satan mooning back at us and it’s not pretty.

Boy in the Striped Pajamas: http://www.boyinthestripedpajamas.com