Hoobastank kicked off their 2009 tour in front of a (half) full house in Orlando, Florida, taking the stage at 8:20. Supporting their new record For(n)ever, Southern California’s golden boys exploded onto the stage with ferocious energy. 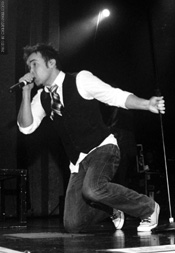 A classic red velvet curtain served as the backdrop for Hoobastank’s clean and simple stage show. The group’s “OO” logo shined from behind drummer Chris Hesse, barely high enough to see, and a black platform placed near center stage provided guitarist Dan Estrin with a lofty spot from which to see and be seen.

Frontman Doug Robb was quick to remind the crowd that they’d “come to see a rock show” – inspiring an arena-rock-style audience sing-a-long on one of the group’s latest ditties, “My Turn.” To me, the 40-minute set seemed short given the group’s chart-busting, platinum track record. However, it was enough time for the guys to knock out a few selections from the new record along with the band’s signature über crowd pleasing hit “The Reason” and the mighty show-ending “Crawling in the Dark.” 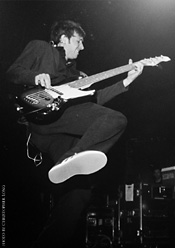 By 9:30 The Hard Rock Live was nearly filled to capacity as headliners 3 Doors Down prepared to take the stage. In contrast to Hoobastank’s concise, high-energy, fat-free set, 3 Doors Down seemed tired, uninspired, and lackadaisical. Although bassist Todd Harrell and drummer Greg Upchurch held up their end of the show, guitarists Matt Roberts and Chris Henderson probably could have been replaced by cardboard cut-outs without compromising much of the group’s performance. Vocalist Brad Arnold was in fine voice, yet displayed little energy and engaged in only minimal in-between-song banter. In fact, with the exception of dedicating “Let Me Be Myself” to recently departed Lynyrd Skynyrd pianist Billy Powell, the frontman had little interaction with his adoring audience.

A jumbo video screen served as the backdrop for radio rock’s current poster boys – displaying non-stop video images, synchronized to each song throughout the show. Although the light show and high-tech onstage videos were certainly impressive, the ten-foot high, pyramid drum riser seemed a bit dated, over-the-top, and somewhat out of place. It perhaps would have been better suited for a Dio concert.

Apparently 3 Doors Down have opted to save some cash and do without a wardrobe manager on this tour. In fact, despite wearing the obligatory Affliction-type, modern rock-dude t-shirts, I still had difficulty distinguishing between the band members and the crew guys. And is it just wishful thinking or didn’t that dopey faux-hawk craze expire already?

But 3 Doors Down is a huge international act with an amazing string of mid-tempo, sound-alike hits, and judging by the thunderous sound of approval from the crowd, it’s a safe bet that, except perhaps for the band members, a good time was had by all.