When nearly 150 bands are scheduled to perform over a three-day span, many a band could be lost in the masses, yet the true gems always shine bright. Such is the case with King Kahn & the Shrines. They performed on Friday night, at Florida’s inaugural Harvest of Hope Festival, to a sizable crowd of the uninitiated – myself included – and did not disappoint! 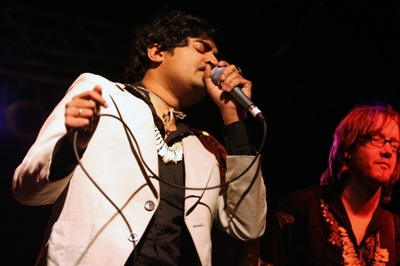 Stage presence is certainly a key element of any artist, but to have an entire stage filled with charisma, energy, and soul is something special. It’s not just about matching outfits, the on-stage cheerleader who shook, shimmied, and grooved the entire set, or the large persona of “King” – complete with top hat and cape – it’s about an experience. We were treated to a soul-drenched throwback revue that ignited our ears and set our bodies in motion. The talented nine-piece group, including horn section and organist, tore through their set with original material from their self-titled record. 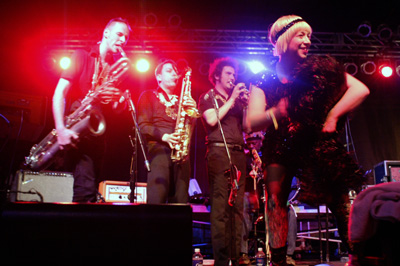 King Kahn, a tall gent perhaps of Eastern Indian persuasion and an unlikely source to possibly be channeling James Brown from the netherworld, proceeded to jump, jive, and wail his Shrines through the evening. Using a tried and true recipe of R&B, soul, and funk, KK&S stir, add a pinch of humorous lyrics, and yield “Welfare Bread,” or “Took my Lady to Dinner,” where Kahn describes her eating more than a fair share. KK&S could also kick out the jams as evidenced on “I Wanna be a Girl”, which he dedicated to the “transvestites, trannies, and freaks out there.” On the flipside, a slow roller like “Shivers down my Spine” had an almost eerie undertone.

Everyone in the band was inspired, particularly organist Fredovitch, whose instrument was crucial to the retro sound. Ladies and gentlemen, KK&S is the real deal. While they play on a bit of kitsch, they are no novelty. Catch the supreme genius live if you can.