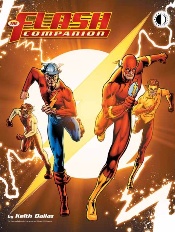 Regardless of whether his name is Barry Allen, Jay Garrick, or Wally West, the Flash has been a superspeed crime fighter for seven decades. Although he never reached the universal icon status of Superman or Batman, the Flash has long been a beloved character in the pantheon of comic book super heroes. The Flash Companion chronicles the Scarlet Speedster’s history from the 1940s to the present through essays, interviews, and artwork.

The most interesting parts of the book surround the Golden and Silver age eras, told through profiles and interviews with Flash creative stalwarts like Gardner Fox, Carmine Infantino, and Julius Schwartz. The initial creation of The Flash, his Silver Age return as Barry Allen, and Allen’s death in Crisis on Infinite Earths are all covered in-depth and make for a fascinating read. Of course these guys are not only Flash experts, they are the people who created the comics, so their expertise cannot be matched. Important milestones and memorable story arcs are covered, making one want to re-read some comics.

The modern era is covered in equal depth but is far less compelling. Not only did the character become less interesting when the Flash mantle moved from Barry Allen to the grown-up Kid Flash, Wally West (and his kids), but the people working on the comics aren’t legends of their trade. However, there is a nice piece defending the Flash TV series, placing part of the blame for its demise on having to go head to head with The Simpsons.

A hero is measured by his enemies, and The Flash has arguably the most colorful line-up of villains. The Rouges Gallery may not have the global threat of villains like Darkseid or Brainiac, but they have tons of personality and are a real threat to the Flash and the citizens of Central City. Flash’s Rouges Gallery is featured through in-depth profiles of the likes of Gorilla Grodd, Captain Cold, the Pied Piper, and Captain Boomerang. The Rouges Gallery often proves more interesting than the Flash himself. These bios are quite detailed, dealing with the characters’ evolution over the years, and making them feel like important parts of the Flash’s world.

The Flash Companion is not likely to be of much interest to the casual comic reader, and hardcore Flash fans may already know much of the info contained here, but there is undoubtedly some info revealed that will be of interest to even the most well read fan.