TV Party: The Everything for Sale Show 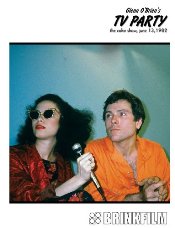 By summer 1982, Glenn O’Brien and his TV Party crew should have been on top of the world. They’d made the move to a proper New York City public access TV station (Channel J). They were now broadcast in color and even had actual sponsors and ad breaks. Yet, this was to be the final season of TV Party, and everyone on air looked supremely uncomfortable with the sponsorship. Although there are worse things in life than commercial underwriting from Gotham Book Mart and a fledgling ROIR records, it has to be said that O’Brien and his troop got it together, as much as the slack-as-fuck TV Party knuckleheads could get it together, and delivered a show that is in equal turns brilliant and annoying viewing. TV Party was never meant to be enjoyable, in the strict constructionist sense of the word. It was talk show as situationist art action, television as No Wave scree, television as Ed Wood fever dream, television as drunken mess. It perfectly summed up being young and arty and impatient and fucked up in New York City.

The show begins with the TV Party Orchestra setting up their instruments and warming up before launching into a song after several torturous minutes. You’re just sitting there thinking, “Are these guys idiot savants or do they just genuinely not have their shit together?” There are moments of copious dead air, awkward pauses, shaky camerawork, rushing guests on and off set, people talking right over interviews, misspelled chyron, cameras cutting to the wrong person and then lingering. You also see O’Brien fiddling with his microphone so it sounds like a windstorm in the studio. The hosts and band look straight into the camera with a look that just says, “Yeah, this is shitty. Fuck you, we’re having fun, go get your own show.” These gaffes aren’t really gaffes, they’re all hallmarks of a TV Party aesthetic that would come to herald every oddball internet TV show you care to think of, as well as surrealist chat shows like Yo Gabba Gabba, The Tom Green Show, Henry Rollins Show, SNL’s “Sprockets,” and So Graham Norton.

On tonight’s show, Charles Rocket shows up in a pair of tight orange jeans, slightly dazed, fresh off being fired from Saturday Night Live for dropping the f-bomb on the air. He’s not one to dwell though, instead hooking an accordion up to a distortion pedal and ripping through a version of “Wild Thing” with the house band. This Russian poet shows up looking like a member of Johnny Thunders’ Heartbreakers and reads a terrible poem from his new chapbook while the band silently cracks up in the background. And this German New Wave dude shows up at the very end to play a song with the house band over the credits. So far, so mess. But it’s all worth it: the whole shebang becomes incandescent when a ragged Jeffrey Lee Pierce staggers onstage clad in a fitted military jacket, an oversized Deborah Harry pin, sunglasses, and messy bleached-blond hair. After unsteadily answering a few questions about being president of the Blondie fan club (truth!), he launches into a timeless, Robert Johnson/Son House style blues drone. It’s gorgeous and ragged, like an old freight train’s whistle echoing through a deserted house.

Then it’s over just as abruptly and utterly bonkers as it began.