Live From the Tour Bus

I learned a couple of lessons about interviewing over the phone after talking with the alt-country septet Or, the Whale. 1. It’s best to wait until they are actually in cell phone range before starting the interview, and 2. Get the names of the band members before the interview and not afterward. It makes transcribing a very painful experience. Thankfully, they are a down-to-earth bunch and were more than accommodating. After about a dozen phone calls (literally) back and forth as they moved in and out of cell phone range on their way to Eureka, Oregon, the first stop on their mini-tour, I finally captured the interview, albeit in two parts. The band talks about the short mini-tour behind their debut album Light Poles and Pines, plans for a national tour, new music, and what is with the name. 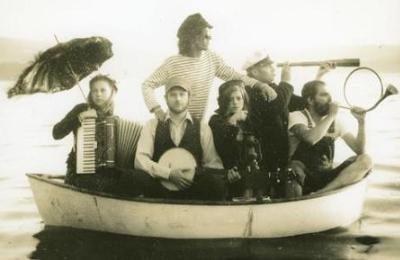 How long is this little mini-tour?

Matt Sartain (guitar, vocals): It’s just over the weekend [Feb 19-21]. We’re just doing it tonight, tomorrow and Saturday night and then we’ll be heading back to San Francisco.

Do you enjoy life on the road, these mini-tours and being on the road and seeing your fans?

Justin Fantl (bass, vocals): I don’t want to speak for everyone, but we pretty much love it. It keeps us energized and gives us something to look forward to.

Is it tough to get it all coordinated?

Julie : It’s not so bad any more. Initially it used to be where you didn’t know anybody in any town and you had to research the venues. Now we kind of have friends up there that we have met and we have people we know that will come out. It’s much less stress. You know what you’re in for.

Is it hard to tour with seven members in your group and all of your equipment?

Lindsey Garfield (percussion and vocals): We tour in a big SUV seven-seater with a trailer with all of our equipment. I think we have it down to a science now.

Do you have a national tour in the works?

Matt : We are doing this weekend thing right now, then in March we are going to South by Southwest and back. Our plans for our national tour will probably be in October. That’s the plan.

Do you enjoy the festival circuit?

Matt : We’ve only done local festivals. We did Noise Pop last year. We did the Treasure Island festival. It’s pretty cool to hang out during the daytime and play a show with a lot of great bands.

Do you have a pre-show ritual or do you do anything before your shows?

Lindsey : Umm… we do vocal warm-ups. The singers get together in a room and warm-up.

Matt : It’s pretty straight forward. We don’t have a little ritual really. We don’t put our hands in the middle and say “Go music!” It sounds a little hokey. We try to take a minute and relax and get our chi in line.

So you don’t all sit around and sing “Kumbaya?”

Do you have a particular place that you love to perform or visit?

Lindsey : I’d love to go back to the East Coast. We’ve done it once. I think it was a year and a half ago, up around the Northeast.

Up around the New England area?

Lindsey : Yeah. We also hit the Northwest a lot. We try to go up there around every three months. Portland, Seattle, L.A., and southern California…

Alex Robins (guitar, banjo, vocals): Yeah, we’ve hit all those cities and areas at least a couple of times (on the west coast) and it’s familiar, which is nice.

You are touring in support of your debut Light Poles and Pines, which I really enjoy. What was the recording process like? Did you all go in and play the songs as a group or was it individually?

Tim Marcus (pedal steel guitar, vocals): We actually recorded most of it in one day.

Tim : Yeah, we all played live at Closer Studios and our friend J.J. had this little mini-studio and we all just piled in over the weekend and played most of the stuff, polished it up, and it’s pretty much how we sounded at that time. We still sound like that. It’s a really live thing.

I wondered because on the track “Bound to Go Home” at the beginning it sounds like you all get started and then somebody yells, “Dammit!” and you all start again.

Alex : Yeah, on that one we were all set up in the live area and it was fun because we were all behind on the count and that was kind of my lash out.

Matt : I think we overdosed on that song. It was the artificial start. We would record differently, different parts. We would record the drums and the bass and then go back and do the overdubs on the guitar and the vocals. It was just like, “Let’s get out of this.” I played banjo on that song and you sort of hear me yelling in the hallway.

Tim : It was a nice break from everything.

It was just nice to get all of you together and do what you do best. 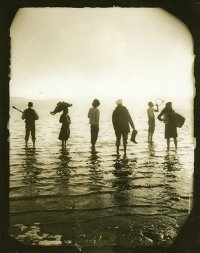 So was it intentional to keep that in there?

Julie : We didn’t leave it there, we didn’t take it out. That way it wasn’t intentional. We just decided not to take it out.

Your first single is “Call and Response,” is that a reaction to Hurricane Katrina and FEMA’s response?

Alex : You know, it was a bit more general than that I think. It wasn’t necessarily a response to FEMA or anything like that, I think it was just a general thing. I reacted by writing that song. I was just bummed out by what was going on and I think in general I was speaking for all the people who passed away during the hurricane down in New Orleans. It [FEMA] wasn’t a new process. I think the country woke up to what was going on down there and understood that there was a lot more history behind it.

Did it take you a lot of time to write it or was it more of a stream-of-consciousness?

Alex : There were some parts that were a little more particular, but it was pretty stream-of-consciousness, which doesn’t happen too often.

One of my other favorite songs on the album is the waltz, “Isn’t She Awful?” What was the inspiration for that song?

Matt : Actually, I wrote it after watching La Dolce Vita. There is a moment when the character, Bill, is talking about his daughter and how wonderful she is, how inquisitive and all these things and she actually asks if he’s the mother’s son and all this insane stuff. From there it’s just sort of dreamlike, their reactions.

What is it that influences you either musically or not musically?

Justin : Everything. Any movies, any music we hear. I don’t think there is any one thing or one certain thing that influences us.

Lindsey : I think one thing that’s great is that we all have different influences. I can’t speak for anyone else, but with me I write story songs, like competitions, loss, heartbreak, love. They are stories that I read in books or that I see, so for me they are not personal.

Alex : I’m kind of the opposite of that. I don’t really use an inspiration. In terms of your question, it comes down to what inspires you. In terms of making music and playing in a band, I’m definitely inspired by all the people who are also there. We meet a lot of townspeople that think that I am one of them. It’s nice to play with a bunch of people who are also really good. Playing live shows is inspiring because it brings a lot of energy to our shows, knowing that the people out there know that you are giving it your all. I think that’s really inspiring. What inspires me musically? It’s just making music. We really have an open relationship when it comes to speaking our minds about what we like and what we don’t like.

How did you all meet and become Or, the Whale?

Alex : Matt and I played together for a couple of years and sort of reconvened and decided to start a band and it spread out from there. It just sort of came together and was coincidental and went from there.

I have one last question and it’s a two-parter. In 2007, The Onion named Or, the Whale one of the worst band names of the year. What was your reaction and how did you come up with your band name?

Justin : We were psyched to be on that list.

Matt : We were honored to be there. It was pretty cool.

Justin : We’d rather be known, than anything. There are so many names out there, like the “The” names. We’ve definitely had a lot of criticism on our name and we don’t really mind. Like why do we have a comma in our name.

So how did you come up with your band name then?

Julie : We just sat down as a group and we had to come up with a name. We had suggestions, but some of them were so lame that they had this nice neutral connotation. It wasn’t too descriptive. It wasn’t annoyingly intentional. It had some imagery. It’s also the subtitle to “Moby Dick.” That’s not why we chose it, but there were a few reasons, like Alex happened to have a tattoo from a scene from one of the earlier books. It’s kind of an etching, or ink drawing. We also have a song, “Life and Death at Sea.” So there are some things that came together and we just rolled with it.

Well, thanks for taking the time to talk to me. I wish I could come and see you, but it is a little bit of a distance for me.

Alex : We will be in Omaha probably in the summer.

Cool! I’ll definitely have to check that out. I love the album.

Justin : We’re glad you dig it. We have another one on the way.

Julie : We just finished recording our second album and we will be mastering it next week. We’ll have it completely finished around May, and it won’t be coming out until the fall.