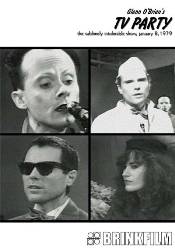 As a kid I assumed all famous New York people knew each other. You know, like Joey Ramone would take the subway to Andy Warhol’s place then they’d all go over to Afrika Bambaataa’s pad for Lou Reed’s surprise birthday party.

Then I grew up and realized that that probably didn’t happen, sort of how like I figured out that bands didn’t all live together in a big house and drive around in a van solving mysteries.

But after watching a 1979 episode of TV Party, I realize that I might have been onto something as a kid. TV Party was a public access TV show hosted by Glenn O’Brien, who went on to become GQ magazine’s Style Guy. You know, the guy who tells people not to wear sandals or cowboy boots to work.

TV Party is an amazingly entertaining trainwreck. Microphones stop for minutes at a time, cameras go out, the host tries to take phone calls but can’t find the phone, but through the whole thing O’Brien’s charisma and wit shine through. And the guest list? How about Debbie Harry and Chris Stein hanging around taking phone calls while Stein berates the crowd, “If this was Johnny Carson you wouldn’t be carrying on like this, you’d be paying attention.” Or Klaus Nomi looking spacey before playing a cool aria with space sounds at the end? How about a dude from The Dictators singing a Beach Boys song while Trish and Snooky (the women who started Manic Panic) cheer in the background? And that’s some of the guests in just in one show.

A fascinating look into a now-vanished New York art scene, TV Party is definitely worth picking up.