New Kids on the Block

New Kids on the Block

Tie your hair in a ponytail on the side, ladies, and peg those acid washed jeans cause we’re about to party like it’s 1989! New Kids on the Block (or NKOTB, if you please) are back together, touring behind their first album in 15 years, and they can still fill up arenas and break hearts. 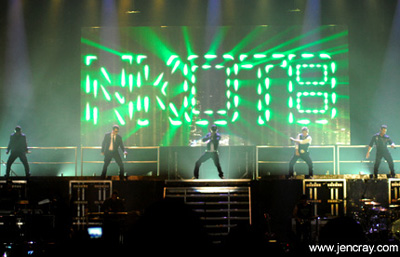 While Orlando’s Amway Arena was far from sold-out, the mere fact that this boy band that birthed all modern boy bands could still pull in thousands of fans was a major feat. These fans weren’t just the curious either, these fans (95% of whom are women, by the way) were buying up t-shirts, getting drunk, and letting their inner teeny boppers shine. Before the lights fell they were dancing in the aisles, swapping stories with strangers, and sharing the excitement of seeing the reunited boys from Beantown. Two such ladies stumbled up to me to tease me about the hilariously inappropriate Iron Maiden shirt I was wearing. 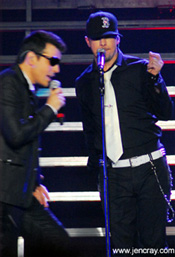 “You’re wearing a metal shirt, but you know you’re psyched about the New Kids!” they squealed like a couple of school kids.

Confession: I kind of was excited, what can I say? I’m a child of the ’80s. I saw these guys at the height of their reign – at this very arena – when I was in middle school and though I haven’t listened to their music since that time, I’m not immune to a catchy pop song. Especially when it reminds me of a time when my biggest worry was whether I was gonna pass my math test that week.

Though I didn’t shriek, or storm the stage, or join in on any of the crowd competitions for sound levels, I did gain a certain satisfaction from seeing all five original New Kids, Donnie, Jordan, Joey, Danny, and Jon – that’s right, I know their names! – perform “(You Got It) The Right Stuff,” complete with the famous choreography. It’s amazing that these guys can still do those dances, and hit those high notes. Jordan Knight never even seemed to struggle on those sky high falsetto parts. Beyond the sound, they still looked like the same bunch of teen pin-ups that used to hang on most of these fans’ bedroom walls. The youngest member is 36, the oldest is 40. Bravo, guys – really. 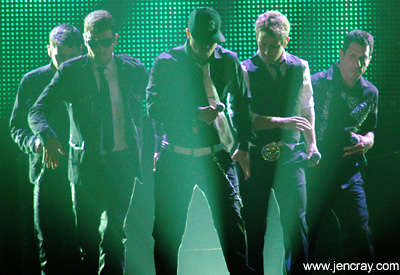 Tickling pink the fans further back, the Boston bred boys popped up on a small revolving stage that rose high up in the air – putting them within hands reach of fans with the not-so-great seats – for a three song set. This happy little surprise couldn’t have come at a better time, having followed a video tribute to “those we’ve lost” that capped off the song “If You Go Away.” The tribute included famous faces like Kurt Cobain and Heath Ledger (whose photo got huge applause), as well as members of the boys’ families.

The intimate set, which had the boys encircled around – or sometimes on top of – a piano, culminated with one of their biggest hits, “Tonight” off 1990’s Step By Step. “This song will weed out all of the non-fans. Sing it with us – you know the words,” resident rebel Donnie Wahlberg announced before leading the entire arena into the song. 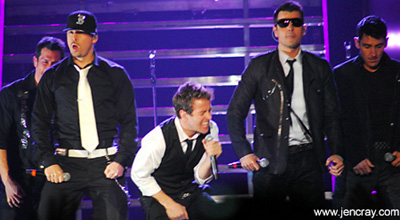 Despite my approach to this show from a strictly nostalgic standpoint, I found myself appreciating these guys as performers. The songs themselves – especially the newer, hip-hop inspired ones like “Dirty Dancing” and “Grown Man” – are as cheeseball as ever, but as a group these “kids” could give bands half their age a run for their money. ‘N Sync and Backstreet Boys, take note.

New Kids on the Block: http://www.nkotb.com