A group of young men from Tacoma started to play music after school, and before they knew it, performed on American Bandstand in Philadelphia. After extracting the R&B elements from the early rock they heard on the radio, the Fabulous Wailers added an original, slightly muddy seasoning. Some would later call this “garage rock” or the “The Northwest Sound,” a sonic signature that could still be heard decades later among the rosters of Sub Pop and other indie labels. The Wailers’ dominance of the local club scene at the turn of the ’60s was so overwhelming, it inspired a legion of other young musicians – including Jimi Hendrix – to attempt to do likewise. The Fabulous Wailers’ story is indeed the stuff of big screen bios – but their tale has inexplicably never been filmed. 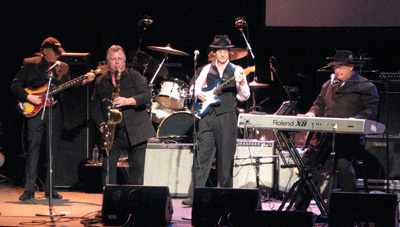 Across town, a couple of masonry workers learned to play pawnshop guitars after the the 5 o’clock whistle blew. Soon, they diagrammed the future of guitar bands with “Walk, Don’t Run.” With a great deal of motivation, a bit of luck, some help from a business-savvy mother and the addition of two veteran musicians, the Ventures conquered the world in six short years. In doing so, the students-turned-masters literally taught at least one generation of guitarists how to play.

Roughly 50 years later, the two groups met on neutral ground – Seattle’s historic Moore Theater – for what decades ago might have been a battle of the bands. This night, however, was for celebrating. While most of their contemporaries sat around thumbing through their royalty and Social Security checks, the Wailers and the Ventures released a new, joint CD that day – Two Car Garage – and a joint world tour has been strongly hinted at.

First into the ring were the Wailers, who wasted no time in getting bodies moving. With vocalist/pianist Kent Morrill at the helm, the band electrified the hall with a set that included some of the most influential songs in rock history – “Road Runner,” “Tall Cool One,” “Mashi,” and “Dirty Robber.” Morrill’s voice – a Northwest gem unto itself – is still powerful; with eyes closed during their wild classic, “Out of Our Tree,” one would have thought they were back at the old Spanish Castle. 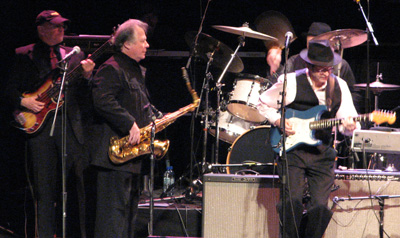 John Hanford did a solid job filling in for the late, legendary Rich Dangel (originator of the “Louie, Louie” riff), but his axe was overwhelmed by the enormous wall of sound created by Morrill, organist Pat Hughes and sax giant Neil Rush. Drummer Ricky Lynn Johnson (also of the re-formed Sonics) provided a lot of vitality to the set with his punk-approaching style, a counterpoint to Morrill’s soulful pipes. Bassist/rock visionary Buck Ormsby lurked in the shadows, only coming to the front for his hilarious half of the vocal intro of “Isabella.”

The Wailers only slowed for for “It’s You Alone,” a ballad that accompanied a slideshow tribute to their fallen bandmates – beginning with the wildly popular singer “Rockin” Robin Roberts, who was killed in a car crash in 1967. A classy gesture that left few dry eyes among their early fans.

During the first recess, the younger hipsters in the cheap seats came down to mix with the older folks in the lobby. It was if a Death Cab For Cutie audience, looking for an afterparty, accidentally crashed an AARP conference. A true representation of The Ventures’ and Wailers’ far-reaching legacies; a sight to behold. Those tardy in getting back to their seats missed another sight: Alec Baldwin congratulating the bands. On the video screen, the actor and an eclectic slew of celebrities – Joe Perry, Agent Orange, Billy Bob Thornton, John Fogerty, the Naked Cowboy, the Presidents’ Dave Dederer, Mudhoney’s Mark Arm and others offered their thanks and tributes. 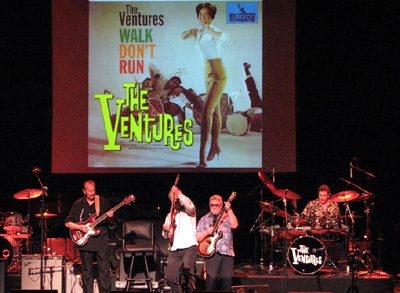 Then the Ventures got down to business. Fresh off the plane from an L.A. studio and their umpteenth recording session, the band jumped into the number that put them on the map. Barely pausing, they shifted up to the rousing “Journey to the Stars” – one of several tracks they would play from their mind-boggling 1964 classic, The Ventures in Space. The combo then slowed the pace a bit with the gorgeous Bob Spalding number, “Blue Dawn,” before continuing with a 21-song set that proved to be their most inspired in recent memory.

With longtime collaborator Spalding having replaced retired-from-the-road founding member Bob Bogle, the band has had a seamless transition, and they brought their A-plus game for this special occasion. With Don Wilson’s furiously churning rhythm chords ringing on his left, guitar-god-among-men Nokie Edwards took center stage. 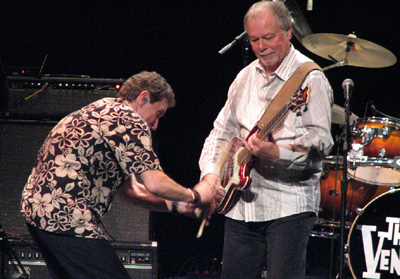 Perched on a stool, this true country gentleman – sort of a hybrid of Andres Segovia and Chet Atkins – injected some western picking into some surf numbers, and some classical licks into pop epics. “Slaughter On Tenth Avenue,” “Apache,” “Penetration,” “Diamond Head”… a guitar fan’s ultimate buffet. Washington State Lt. Governor Brad Owen joined them on sax for “Surf Rider,” and another fan and friend, Yes drummer Alan White, provided timpani for “Hawaii 5-0.”

Another drummer, the Ventures’ Leon Taylor, stole the show, and quite possibly the entire night. With a video montage of his legendary father, Mel Taylor, and himself playing behind him, Leon took his dad’s famous, minutes-long solo in “Caravan” to another level – and made it is own. For the uninitiated, this Ventures tradition features the bassist and drummer working in tandem, tapping out the song’s rhythm on the strings. However, the finale of tonight’s solo, a fiery bass/tom/snare crescendo – was even more awe-inspiring than usual; the sheer power of it might have left Alan White blinking. 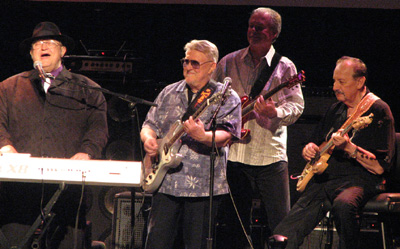 The two groups then joined side-by-side for an obligatory jam of songs from Two Car Garage. They didn’t get their footing until about halfway through “Needles and Pins,” but with Wilson and Morrill singing in tandem, the old Los Bravos hit “Black is Black” came off pretty nicely. The night came to a close with – what else – “Louie, Louie.”

Afterwards, the audience staggered out into the lobby in search of an autograph from their old and new heroes. It was a very sentimental evening, mostly for the fans; the Ventures and the Wailers made it clear that they’re still working for tomorrow.

The Ventures and The Wailers: http://www.twocargaragemusic.com/