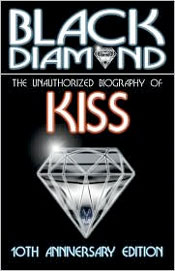 Over the years there have been several well-written, riveting and compelling books published on the history of the rock group Kiss – Kiss and Sell by CK Lendt (1997), Kiss and Make-Up by Gene Simmons (2001) and Kiss Alive Forever by Curt Gooch and Jeff Suhs (2002). Black Diamond, however, is not one of them.

Granted, at the time it was originally published in the late ’90s some of this information may have been new and possibly even interesting but Sherman has (un)successfully managed to cram so much shit into such a small bag that it’s often difficult to distinguish fact from his poorly written (near-) endless editorializing, which varies from irresponsible and inaccurate to just plain dumb. In fact, even as a longtime Kiss fan, I found sifting through these 300+ pages of gobbledygook to be an excruciating chore.

Dopey statements immediately ensue in Chapter One when Sherman informs us that even non-Kiss fans recognize Peter Criss’s name more than any other Kiss member. This may come as a surprise to founder, music producer, actor, best-selling author, and reality TV star Gene Simmons. Sherman further insults our intelligence by maintaining that in 1996 Dick Clark and the ABC network were the first to “cash in” on the Kiss reunion tour by having the band appear on a New Years Eve program – six months after the tour’s kickoff. Let’s think about that statement. The author is suggesting that it took six months for anyone to “cash in” on a Kiss tour? And then he points the finger at a TV producer whose program would have been watched by millions regardless of Kiss’s participation? These types of statements may sound impressive to some in a Kiss chat room, but I know better. Actually (I hope) most Kiss fans know better and for $21.95 I expected a little more responsibility on Sherman’s part.

And it gets worse.

“Jokey” is NOT a word (pg. 248). When listing a group of names (e.g., Tom, Sally and Joe) you spell out the word “and” before the final name. You don’t use an ampersand (pg. 6). The phrase is “household word” not “household world” (pg. 5). Oh yeah, the word “wanting” is hyphenated “want-ing,” not “wanti-ng.” This is basic “Writing 101” stuff. At least it should be basic, especially considering that this isn’t Sherman’s only book. I wonder if all of his work reads like a high school fanzine.

And when trying to explain on page 246 why Kiss chose one album cover concept over another for the 1997 record Carnival of Souls, Sherman delivers perhaps one of the most awkward and poorly worded passages I’ve ever read – and I quote:

Yet the reasoning for the change was not that fans may not recognized it was a Kiss album if the “Flaming Tiki Head” was used, but rather that people would be expecting any new album by the band to be that of Gene, Paul, Ace and Peter.”

Black Diamond is touted by C.G. Publishing as a compelling, behind-the-scenes biography. However, it’s actually not much more than a collection of regurgitated magazine and television interview excerpts with various Kiss members from over the years coupled with what reads like the uneducated ramblings of a wannabe at a Kiss convention who’s trying to impress other uneducated wannabes at a Kiss convention.