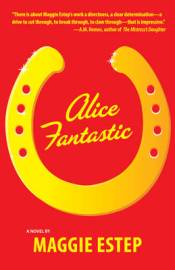 I’ve been officially trained NOT to be a sexist anymore, but I’ll have to class Alice Fantastic as a classic piece of Chick Lit. It’s full of heartbreaking emotion, reconciling siblings, pit bulls, and lesbianism. Alice Hunter chews men up and spits them out while surviving on her solid skills as a professional horseplayer at Aqueduct. Her sister Eloise won a huge injury settlement and occupies herself with making bizarre stuffed animals. Their mother lives in the wilds of Woodstock, and rescues as many dogs as she can squeeze into her rambling hippie shack. None of them really get along, and each has a slightly different but fatal problem with intimacy. Sometimes they like men, sometimes women, but whichever way the hormones are flowing, whichever they choose, they chew partners up and spit them out like Dr. Frankfurter. The only constant in their lives is stray dogs.

Estep writes in a light, breezy style, employing the conceit of making each chapter a rotating point of view for each woman. Alice is the most interesting with her racing lifestyle and her oafish boyfriend. She despises him until he gets in serious trouble for defending her. Eloise vacillates between the poles of bisexuality, and Mom gave up on men after she figured out where all these kids were coming from.

About halfway though the book, not much is changing and you realize the book is all about the strained relations between these three women. Minor inconveniences appear – a jailed boyfriend, cancer, and pregnancy darken their lives, but nothing is as bad as a stray they can’t place. That seems to be the fatal flaw here – while I’m hoping for a story that goes somewhere, there are endless pages filled with glowing description of dogs’ coats and their incessant ability to lick anything they see. Pit bulls are mentioned constantly – they’re hard to find homes for, and while nice enough 99.9% of the time, when they bite they really leave a mark. The dogs are both a metaphor and an excuse for the women: incapable of stable human relations, they wander the countryside scaring the residents. While this book isn’t bad for a weekend at the beach or a few hours at the airport, it lacks pizazz. If you buy it, pick up one of the tape roller things to go along with it, you’ll need it to get the dog hair off your coat.