The Daily Adventures of Mixerman

The Daily Adventures of Mixerman 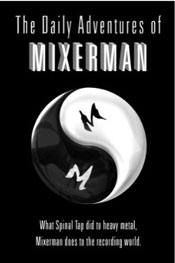 There are many activities best kept safe from a squeamish public’s view, including the manufacture of laws, sausages, and Major Label Records. The Daily Adventures of Mixerman breaks one of those taboos and gives us a viciously candid view of the recording process and the egos that propel it into giving us the worst possible records, artistically if not technically. Reading this book beats actually listening to any of the Alt-This or Alt-That drivel that fills the airwaves. Mixerman clearly knows his stuff, and has a strong, well-formed opinion that will probably keep him from ever working again. While there are numerous outlandish and nearly unbelievable elements in his story, it certainly explains the recording industry’s disdain for their customers, and the uninspiring pile of CD’s that comes through my mail slot.

The biggest leap of faith is that this account was compiled as the author describes. In 2002 when most people thought a “blog” was the swampy area in a murder mystery, this obviously technically savvy gentleman decided to print his innermost thoughts on the net for all to see. However, he does take the minor precaution of renaming everyone. The band becomes “Bitch Slap,” which could be a great glam band name, except these guys sound like a Creed rip-off. The often-absent producer is Willy Show, the out-of-tune bassist is Harmon Neenot, the sleazy A&R guy is Jeremiah Weasel, and the President of the label is Marv Ellis. I think Mixerman liked Marv; his is one of the few nicknames that’s not outright slanderous. But Mixerman saves his highest opprobrium for the drummer, who, depending on his mood, is either Dumb Ass or Cotton (as in “Dumber than cotton.”) This is no story a sane man will post about paying clients in real time.

As the story careens along, we learn the drummer can’t drum, the bass player wants to sing, the singer wants to play lead, and even the skills of a high-paid digital audio editor (Fast Fingers McGillicutty) can’t make the band sound good enough for college radio. After 30 expensive 15-hour days, the label sends the band on a cruise, lest someone get garroted with a G-string. They’ve been told a session player will dub some parts, but Mixerman, Willy Show, his assistant Lance and the drummer’s girlfriend Virginia Skanky pick up the instruments and in five days lay down 10 tracks that sound better than anything the band ever did. Or at least that’s the Mixerman take on the whole deal, and it’s not like we can corroborate anything here. Eventually, his blog gets noticed, everyone involved in the process finds out what this one disposable technician thinks of them, and the poop really hits the hibachi. It’s Spinal Tap, without the topless groupies.

Real or fictitious, the story carries enough technical detail that the writer must be pretty studio-savvy, and I suspect this is true, although I could be hoodwinked. Of course, I’d like to know what hapless bunch of lads fell into this morass, but after reading this comedy of errors, you’ll never look at any band documentary the same way again. Be prepared for an advanced course on recording and editing drums, and nearly peeing yourself every ten pages or so.