Who Killed Amanda Palmer: A Collection of Photographic Evidence

with stories by Neil Gaiman

Amanda Palmer, impossibly dramatic and improbably driven vocalist for neu-cabaret duo the Dresden Dolls (and a solo artist in her own right) is no stranger to big art concepts or the power of a striking visual. With the Dresden Dolls, she looked like Marlene Dietrich as rendered by Edward Gorey, and strictly oversaw all the imagery that accompanied Dolls’ product. To accompany her recent solo debut album, Who Killed Amanda Palmer, she has assembled a collection of portraits loosely inspired by the songs on her new album, but the greater theme is much more direct, macabre, and intriguing. She’s dead in every one of the pictures. See, apparently Palmer has been posing for pictures in various states of rigor mortis for several years now; it’s become a hobby of sorts. But with the assistance of photographers Kyle Cassidy and Beth Hommel (amongst others), things started to get more formal and focused and when the last collaborator jumped on board…. well, suddenly an offbeat hobby became a project of potentially higher profile than her music. 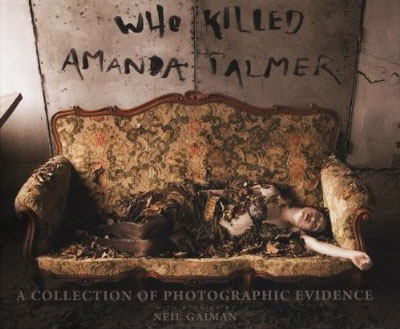 Does Neil Gaiman really need an introduction? The Sandman author, fresh off winning a Newbery award for his young adult novel Graveyard Book and eager to earn back his underground bonafides, crafted a series of surreal, disturbing and oft courtly-vignettes to accompany many of the images within. This is only the latest in a long series of using musicians as muses – like styling Death after Siouxsie – but this is altogether more edgy.

There’s Palmer naked, lying in rapidly pinking snow in front of a Yale University sign. In another, she’s lying on a pool table, wide-eyed, her severe eyebrows as pointed as knives, her skin a sickly green, a tuft of armpit hair drawing in the eye. Or face down in her breakfast plate at some greasy spoon, oblivious diners munching away, everyone a potential conspirator. Other favorites include the whimsical “death by falling typewriter” snap; two shots of one Amanda Palmer being caught just after killing another Amanda Palmer; splayed out on a crosswalk, wearing a makeshift pair of angel’s wings; the Goreyesque shot of her in a long black dress, having just hung herself on a swingset, while a child swings blissfully; the homage to Anne Sexton and Sylvia Plath, Palmer clad in a demure housewives dress, head stuck into an oven, arms limp; lying dead on a golf course while old gents play through; dying onstage, lying heroically limp under her own name in lights (surely Morrissey shares this dream); or the one where quizzical kangaroos stare curiously at her sagging frame. The mages are stark and rich in color, crisp, well-framed, and powerful work.

There are lots of falling deaths, just like the ubitquitous nightmares. And many of the tableaus are outright disturbing. In one shot, she’s naked, face down on a beach, having just washed in on the tide; in torn lace and lingerie, slumped in a seating position in a dark alley as a bunch of bros walk by (guilty or just didn’t notice); half-naked, folded up in a shopping cart, face covered in blood,

The constant simmering undertones of sexual violence or just old fashioned assault and battery can shock, disturb or sometimes even turn the stomach just a bit, no matter how stoic or “in on the joke” the diehard Amanda Palmer fan can act. Wisely, Gaiman stays way the hell away from many of the more openly brutal of these images, leaving the portraits to stand on their own, with no context other than what your eyes take in. The subject matter is strong and explicit, with famed exhibitionist Palmer appearing naked in many of the pages, viscerally bludgeoned, perhaps even violated in others. The inseparable twinning of sexuality with violence reminds me of the photo series that famed Japanese writer – and flamboyant death-obsessed exhibitionist – Yukio Mishima posed for at the end of his life. Portrait after portrait revealed Mishima being murdered in increasingly dramatic and imaginative ways (there was the obligatory seppuku shot, and I believe there was even one with him run over by a bulldozer), including a Saint Sebastian homage, yet another parallel to this book. Of course, the difference is, that within a few months of the exhibition, Mishima-san was dead by his own hand, ritual hari-kari, whereas Palmer strikes me as a steely survivor. It was powerful stuff then, and it’s powerful stuff now.