Woodstock Vision: The Spirit of a Generation 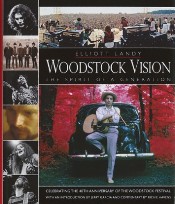 Alongside Jim Marshall and Rolling Stone’s Baron Wolman, no photographer better captured the freewheeling energy of the music of the 1960s than Elliott Landy. Already a photojournalist capturing celebrities and events of the day, Landy gradually shifted his thematic focus to that of a pop music chronicler, down in the front at gigs, and catching musicians in contemplative moments backstage. This bulging hardcover reissue far outstrips the slim paperback that I’ve regularly been consulting for the last few years, and includes a generous selection of outtakes and supplementary shots not included in the past editions of Woodstock Vision. (Maybe too expanded in the case of the Woodstock section, that takes up nearly half of the book.) My beef is with the unfortunate timing of this book’s re-release – to coincide with one of the ever-more-dubious Woodstock anniversaries (40th this time around) – it’s going to get lost in a near avalanche of retrospective tchotchkes and that’s just goddamned unfair given both the quality of Landy’s work and a scope that extends far beyond “3 days of love, peace, and music.” Obviously, as the official photographer of the event, Landy covered that event both backstage and in the crowd, but his best and best-known shots that are compiled herein have nothing to do with the events that unfolded on Max Yasgar’s farm. In fact, truth be told, the lengthy section on Woodstock is some of the weaker material herein, a long series, of on-the-scene ephemera mixed in with admittedly stellar performance shots. There’s one shot in particular of Garth Hudson that is just Biblical in its gravitas.

For a book called Woodstock Vision, Landy’s photos are better seen as kind of a contemplative coda for the fiery Summer of Love. He is best known for his lengthy studies of Boy Dylan and his former backing band, The Band (natch), then safely ensconced in their Woodstock refuge. The shots of Dylan and his former charges are timeless and beautiful. Surrounded by all this lush northern beauty, thick forests and rolling hills, the young musicians appear peaceful contemplative. Dylan, the young family man, finally at rest after several amphetamined years of hyperactive creation, content to hold the children and languidly strum an acoustic, looking clean cut and a lil’ pudgy. The Band, a tight group of poet-farmers, finally figuring out how to live a life not on the road – their shots are seductive enough to make you want to decamp to Woodstock immediately. And Van Morrisson did, apparently. But then Landy is just as skilled at capturing explosive shots of Janis Joplin, the Doors, and Jimi Hendrix, all seemingly about to burst out of their skins at any moment, such was the force of their performance. Best concert shot though, has to be a louche and lanky Frank Zappa casually flipping the bird to someone off camera.

The portraits of the Band, long a personal favorite and beyond iconic (one was snatched for a Rolling Stone cover that made their reputation) are still incredibly powerful. If you start to doubt the healing power of music, look at these pictures. If you’re on the fence about running away to the country, look at these pictures. Five men dressed like severe country preachers, laughing, sharing some secret joke, taking in the fresh air and picturesque views, playing music in a communal house all day and night (and loving it). There’s one taken furtively through a doorway, of Robbie Robertson and Levon Helm playing guitar and drums, watching each other for cues, in a sun-drenched upstairs bedroom. Every detail so finely rendered and captured, I even swear I was there. Playing music in a cramped basement, sharing jokes in the kitchen, standing stock still and taciturn for promo shots in the rain, clad in dark hats and vests. Perfection. Landy’s shots capture this utopian vibe better than any other lensman – a shared spirit that gave us some great ancient ghost music. Too bad it wouldn’t last.

Just publish a book of the complete Band photo sessions and be done with it! I’ll buy six.