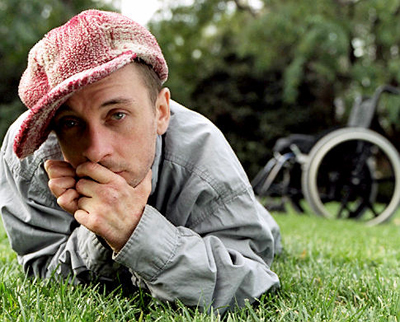 As a fan or as a journalist, I have tried not to become too angry when an artist has taken his or her own life – “Oh, what a waste.” Musicians and actors are, in the end, just like everyone else. For some, accomplishment, fame, and the admiration and love of friends and fans are just not enough when one is alone and weary and the demons – both of the mind and of the physical world – come calling. Try as you might, you can’t put yourself in another’s shoes, so exercises in speculation and judgment are as ignorant as they are pointless.

Having said this, the world lost an astonishingly gifted artist when singer-songwriter Vic Chesnutt passed away Dec. 25, after several days spent in a coma induced by an apparent overdose of muscle relaxants. He was 45. To many, including some of his musician peers, Chesnutt’s death was not a complete surprise. The Georgia native spoke openly of his depression throughout his career; he had said that the condition pre-dated the 1983 car crash that left him confined – physically, at least – to a wheelchair.

I did not mention the wheelchair – either to him or to the readers – in an interview feature I wrote about Chesnutt’s Silver Lake album in 2003.

Aside from being an overused topic, I didn’t think it was relevant. Perhaps I was wrong. Obviously, Chesnutt’s experiences and ongoing challenges heavily influenced his work. And what a body of work it was. Some 17 albums, with two in ‘09. Moreover, Chesnutt’s quality surpassed, by leaps and bounds, the quantity of his output. A rare feat.

Vic Chesnutt was a unique songwriter with a unique voice. Like his friend Van Dyke Parks or Rufus Wainwright or even the esteemed Leonard Cohen, there was no one quite like him. He wrote and sang and spoke with an inimitable, Southern Gothic fashion that put the listener right in the middle of the story. With guitar perched on lap, Chesnutt examined humanity and his own human condition in the timeless style of an eccentric genius writer of books, rather than a composer of lyrics. In that sense, he was frequently compared to his literary heroes, including Faulkner. Indeed, his songs were not cocktail-party accompaniment, trite Top-40 singles, or catchy ringtones; by and large, Chesnutt songs were to be absorbed, considered, savored.

Most of all, Vic Chesnutt was bold; he had the sort of artistic strength that many of his more well-known admirers wish they possessed. Bold not just in choice of intimate or unusual topic (on Silver Lake, for example, he sang for 8:15 about a eunuch in a sultan’s harem), but in style. As a singer and as a writer, he had the courage to develop an atypical approach all his own, and it worked. Chesnutt, who was no Orbison, had no qualms about shifting pitch or changing inflection to add flavor to his song-stories’ characters; conventional tempos and structures were often fodder for tinkering. He was seemingly fearless.

After learning of Chesnutt’s passing, one of my first impulses was to dig out that interview tape to see if some insightful nugget had been edited out. I resisted the urge; maybe someday I’ll re-write the whole thing, as my newspaper articles – with their prerequisite “Who Is He?” introductions to the artist – often make me wince when I re-read them. I don’t think anything of importance was removed; while being gracious and thoughtful and extremely interesting, the songwriter replied to my queries pretty succinctly. I remember us talking at length about the eunuch and the harem (“Sultan, So Mighty”), and his fascination for observing people. It was a brief, somewhat enigmatic interview that I’ve thought about, now and then, ever since.

Finally, it would not be shameless, exploitative, or insensitive to mention that plaguing Vic Chesnutt in recent years were his medical bills for surgeries and regular treatment. It would not be any of those things because he was a very vocal critic of America’s health care system, and was reportedly in debt and in need of further operations at the time of his passing. If medically-related financial problems were a trigger for a working, touring, internationally acclaimed American musician’s suicide… then the shame, exploitation, and insensitivity are to be found elsewhere.

Mr. Chesnutt, may you find the peace elsewhere that so many wish you could have found in this world.