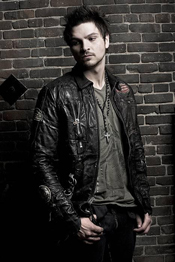 By all accounts, Adelitas Way vocalist/songwriter Rick DeJesus should have become a statistic. Growing up in one of the roughest neighborhoods in Philadelphia, he saw life on the streets: friends and family members in jail, on drugs, dead.

Instead, he now fronts one of the most promising new bands of 2009, Adelitas Way, joined by guitarists Chris Iorio and Keith Wallen, drummer Trevor Stafford, and bassist Derek Johnston. Their self-titled, major label debut was produced by Johnny K., one of the industry’s most respected and prestigious names. The first single, “Invincible,” was chosen as the theme for the weekly WWE Superstars show and was featured on CBS promo spots for CSI Miami. Adelitas Way is in demand as an opening act for top groups like Hinder, Tantric, and Saliva, and they are now on tour with Shinedown.

“Music saved me,” says DeJesus. “It was the light at the end of the tunnel. I saw what was happening around me. I was slowly drifting that way and I had to get out. Where I’m from, everyone wants to shoot, rob, and do drugs. There’s nothing else to do and it’s survival of the fittest. I reached a point where I realized I was going in a bad direction, but now I’m out here, on tour and making records.”

His first step was a successful audition for a VH1 program. That took him to Los Angeles and then to Las Vegas, where he began putting together the pieces that became Adelitas Way. “We’ve been going at it for five or six years,” he says. “It started out with me trying to find myself vocally. I wrote songs, made demos, met Chris and we started jamming. From there, it was a matter of finding people who were willing to dedicate their lives to the music, live in a van, be broke and eat once a day. We’re making 20-hour drives, packing our trailer, and playing shows night after night on two hours of sleep. It’s a tedious process, so you have to find rebels, not prima donnas. They have to be warriors who eat, sleep and breathe for music.”

For every Adelitas Way, there are thousands of hopeful, talented musicians who never make it past their own city limits. What did you know that they don’t?

You have to keep the mentality that you’re going to get to the next level. You can’t just write a song, get a record deal and become a superstar. You have to start off doing it yourself, making your own record, gaining fans, proving to labels and to other bands that you’re in it for the long haul. We sold 10,000 records ourselves before we were signed, but to catapult your band to the masses, you need three things: hard work, a solid record, and a great team – your management and your record label – driving your career. When you have all of those things, they add up and people start caring and paying attention. We’ve been through a lot as a band, and thank God we made the right moves.

When did your love affair with music begin?

I’ve had it since I was a kid. My parents took me to concerts. I never knew I was good at it. It was always, “I think I can do this,” but I was never sure or never tried. I always sang and wrote songs here and there, but I never went for it until I was 17 or 18 and I decided to try it to see if I was good enough. I snuck into a bar where some acoustic bands were playing, did one song, got a standing ovation and it was a life-changing moment for me: “I don’t suck!”

My dad had a lot of ’70s and ’80s albums and Beatles albums that I listened to. Then I got into grunge, bands like Audioslave, Stone Temple Pilots, Pearl Jam, Soundgarden. When I built this band, so many influences came into it, especially with Chris, who was into Guns N’ Roses, Van Halen and Motley Crue.

How will Adelitas Way remain a slow-burning candle rather than a fast-burning flame?

It’s about the songs and the star power of the band. We make an impact when we play and when we meet people. Whether we’re having fun onstage or changing lives with our lyrics, people walk away remembering us. We work hard to meet everyone, gain fans, put on a good show, shake every hand and take every picture.

Where does your work ethic come from?

My dad is a very old-fashioned guy and he always taught me that if you want something, you work for it. He woke up every morning at 5:00 and worked until 8:00 at night, every day for 20 years, to take care of his kids. He made me work for things. We all have very supportive parents. I feel that they’re all my parents and are all part of the team.

How did Virgin/EMI Records enter the picture?

They were the first people to believe in us. We were writing, demoing and touring as much as we could, and we had major-label interest. The industry is at a point where you really have to prove yourself and step up to the plate. Virgin was no-bullshit with us. They came to see us play, listened to our songs, believed in them and wanted to sign us. Of course, everyone came along and put an offer out, but Virgin had the belief and the vision from the first time they saw us. There was no runaround from them, and they had no doubts that this band could make it. That meant a lot to us.

We had a couple of producers on our list. We were going for a specific sound, a real raw rock sound, not overproduced, edgy, a good vibe, and we wanted someone who would make sure it sounded like us and not try to make it into something else. Johnny makes those types of records. He makes great-sounding rock records, not too polished or too pretty. Working with him was great, and we learned a lot. Virgin also let us do our thing; they didn’t put pressure on us. Making the record was a lot of fun, and hearing things coming together was beautiful. When you listen to it and know how much hard work you put into it, there’s a little bit of magic in the final result. We were in the studio for three months. We lived there and blocked out the outside world. There was no going out on weekends to party. We put in 14-hour days, every day, all day. Johnny’s engineer, Tadpole, is the best. We have a lot of love for him too.

How does the songwriting process work for the band?

It happens a couple of different ways. It’s a lot of my experiences, things I’ve been through, in my lyrics. Chris and I work on stuff together. We wanted to make a record that people could listen to and relate to. Chris comes up with riffs that we vibe on, and the band will rock and jam together in the room. It’s a really great process.

You specifically wanted a two-guitar band. How do Chris and Keith complement each other?

Yes, I did; I think it’s necessary. There are a lot of solos on the record and live, and having two guitar players balances everything. There are amazing performances going on on both sides of the stage, and Keith does all the background vocals, so he’s a savior for me! With those two guys on either side of me, the energy is really high, with Chris ripping it and Keith rocking out. They bring it every night and make sure I’ve got to get my game up, because they kick ass every night. It’s all about everybody being song players. The musicianship in this band – Trevor is a phenomenal drummer and Keith is as solid a rhythm guitarist as you can get. Derek holds it down on bass and Chris – to play the things he plays is just unheard of. We all make each other step up because the level is high and the bar is raised.

You describe yourself as “very emotional.” In an industry that kicks people on an hourly basis, how do you keep from taking things personally and becoming too wrapped up in the minutiae?

I’ve been kicked every 10 minutes, so I’m very, very aware of what it’s like! I have stories, stories, and stories. A lot of it is being young, being in a band, thinking people want to help you when they don’t. It’s a learning process. You have to be really careful and focus on working hard, and be careful of who you surround yourself with. Do everything yourself, because there are so many people looking for that free ride, people who stab you in the back and then come back to you later when you’re doing your thing. I meet up-and-coming bands and I try to help them as much as I can by telling them about the mistakes we made. I tell them to stay focused on themselves because there are no lucky breaks. If it seems too good to be true, it is. Write great songs, work hard, tour, hire the right people and you’ll be OK.

A lot of it is about growth. When those kicks happen to you the first few times, when they come from people you think are your friends, people you’re close it, it breaks your heart. But as you go along, you grow up, you learn, you’ve made the mistakes and you won’t make them again. The first time, you become very emotional and you don’t understand what’s happening, but in the end it makes you stronger; it makes you who you are. If the things in my past hadn’t happened to me, would I have written these songs and made this record? The easy way is not the best way.

You escaped an environment that could have been your demise. But the road is full of temptations. How will you continue to resist and avoid becoming another rock and roll statistic?

This band is not about “sex, drugs, rock and roll party.” Yes, temptation is everywhere, but that extreme lifestyle is a choice. It’s not our choice. This band is a group of guys who take their music seriously and are willing to sacrifice everything for it.