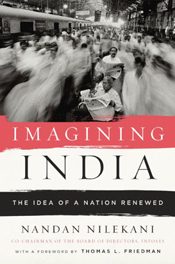 Nandan Nilekani, the author of this exercise in imagination, is often introduced as “the Bill Gates of India.” An exact coeval of the Microsoft co-founder, Nilekani – like Gates – has a long and successful business background in IT, and his net worth likewise places him among the world’s billionaires. His philanthropic endeavors aren’t quite on the scale of Gates’ (indeed, few are) but, as the very existence of Imagining India would suggest, he does have a sincere interest in analyzing and improving the opportunities for the disadvantaged of his native country by means of economic, political, and social reform.

Unlike a great many books of its kind, Imagining India coherently identifies genuine problems, puts them in a sound historical context, and lays out feasible solutions. Which is to say, the usual noncommittal well wishing (of the “it remains to be seen, but if we all work together… “ variety) is muted, and barely any of the challenges that Nilekani outlines are, at least from this outsider’s perspective, so painfully self-evident as to be undeserving of the space they’re allotted.

The drum he’s banging, however, sounds a single, unwavering note: free market, free market, free market. This emphasis is understandable given India’s tendency to place an inordinate amount of trust in its teeming, venal, Byzantine bureaucracy, something Nilekani makes abundantly clear throughout the text by means of personal anecdotes and case studies. But, with the events of late 2008 and their repercussions still fresh in our minds, there is no shortage of evidence that the sort of laissez faire free market Nilekani so desperately wants to see ushered into India would bring with it a host of its own problems. The avarice and cronyism and petty power plays that cause the wheels of government to stagnate and hinder progress in his country would simply find other methods by which to assert themselves. When, for example, the author writes:

[T]he gradual atomization in political power that followed [India’s Congress party’s stranglehold on power and its self-serving economic policies] could have been far less powerful had the decades under Congress governments enabled the kind of inclusive economic growth that dissolves feudal structures and relationships. Prosperity, after all, is the most unifying religion there is.

he seems to have overlooked the disheartening status quo in the United States, where citizens are ever more dependent on the benevolence of their employers (and therefore often caught up in the fallout of their wheelings and dealings) for essential services such as health care and retirement funds. This is merely one form of feudalism swapped for another. Furthermore, the recent fumbling attempts to rectify this situation there have been thwarted not by the extravagant, populist sort of government that Nilekani laments throughout Imagining India, but by one that is far too beholden to the captains of the service industry. True, as his sweeping closing sentence has it, humans often find themselves remarkably united in their singular quest for prosperity, but prosperity, at least in the form it regularly seems to take, is inherently divisive in the way it widens the chasm between the rich and the poor and disenfranchises the latter from the political process. Far from creating a level playing field, prosperity tends to favor a select few, more often than not the already prosperous and powerful.

The brief closing section of the third part of the book, “A Fine Balance,” does express some caution towards the pitfalls and excesses of a free market as it might take shape in India:

The government has to maintain independent regulatory bodies, promote open markets and limit oligopolistic businesses – especially in natural resources such as iron, coal, gas, oil and spectrum. It must encourage fairness between markets and civil society through independent, transparent stock markets and financial regulators, and a legal system that prevents mob rule and influence by business. […] “Else people become mere spectators to wealth creation, who forever feel left out and sidelined.”

But these caveats arrive rather too late to take the edge off of the author’s unbridled enthusiasm for an economic system that, while not without clear advantages, lends itself to waste (in terms of both surplus and pollution) and disparity. Such enthusiasm, on the other hand, could simply be an equal and opposite reaction to offset the lack of it that Nilekani sees in India. As he explains early on, India’s “equating of trade with imperialism has meant that as a free nation our views on globalization have been intertwined with our insecurities. Successive governments saw globalization as a threat, something that would force the country to become both deeply dependent on and vulnerable to the outside world.” He considers the fact that a high-tech, forward-thinking company like Infosys has thrived amid this mindset to be something of a fluke, a combination of fortuitous timing and talented individuals working in concert; it managed its success in spite of India’s resolute insularity and its treatment of the entrepreneur as suspect.

Yet again, this ardor more than likely stems from a desire to prevail against the “irredeemably hostile” political attitude toward entrepreneurs in India that dominated economic debate until the 1980s, and one could certainly do worse than to champion the sort of conditions in which fresh, potentially lucrative ideas have the chance to be realized, but this bias nevertheless pushes the author’s imagining of India and its population of more than one billion in a very particular and limiting direction.

Not surprisingly, Nilekani’s remaining faith is placed in the IT sector. It is the key means by which many of his proposed reforms are to be carried out; it is essential to his propositions on pensions, health care, infrastructure, and renewable energy. Yet in discussing the benefits of digital technology as it relates to, say, a national citizen database and a nationwide ID system, it is also necessary to address its obvious shortcomings, namely, security and in particular identity fraud. “Too often,” Nilekani writes,” we see issuing smart cards as the main challenge of implementing such a system. But building these intelligent little stripes is the easy part.” My point exactly. It is highly unlikely that Nilekani is ignorant of these potential problems, and the absence of even a cursory aside dealing with them is a conspicuous one.

That, then, is the book’s substance: not altogether impartial and far from airtight, but nevertheless comprehensive, interesting, informative, and occasionally insightful – a commendable contemporary crash course on this developing nation for the lay reader. In terms of sheer style, Imagining India suffers from an awkward attempt to make its material chatty and give it a human face. Nearly every chapter opens with Nilekani on his way to rendezvous with someone, usually an expert or old friend, whose environs are described in unnecessary detail (“We meet at Gajalee, one of my favorite old haunts, a Bombay restaurant in Vile Parle that serves excellent fish. The place looks exactly as I remember it, down to the inexpensive menu and 1970s décor – mirrors lining the walls, pink tablecloths, fussy napkins and brocade chairs,” begins one subsection in “S Is for Schools”), and who, more often than not, is never mentioned again after the introductory paragraph, or worse still, reappears several hundred pages later with no mnemonic indicators. This leads to a blurry procession of exotic names that carry very little weight, and that only appear to be included to lend a sense of authority and unanimity to Nilekani’s arguments. Over the course of almost five-hundred pages, this format becomes so formulaic that it borders on parody.

India’s course over the next decade or two, whether as prediction or recommendation, will not be mapped in its entirety by a single book. Aided by its length and its insider’s point of view, Imagining India takes a shrewd look at the road the country has traveled until this point and lays out one possible route that its politicians would be wise to consider (the sooner, the better), and that curious observers will find immensely useful in understanding why India is where it is in the coming years. Nilekani’s imaginative forays are not nearly as bold and far-reaching as some might like, but they do remain a constructive contribution to the pressing questions of Indian socioeconomic policy as well as the larger ongoing debate that is taking place in and around all of the world’s up-and-coming nations.