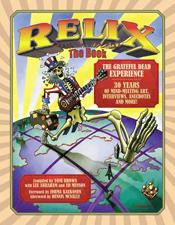 Some people worship Jesus, some people worship the Packers, and some worship the Grateful Dead. The Dead were wildly successful, yet never charted a hit until the very end of their career. Rather than rule the charts, they were carried by a dedicated audience of Deadheads who followed them around the country and made them one of the biggest bands in Rock and Roll. Unlike today’s bands, The Dead were very permissive and allowed audio taping at their shows, resulting in thousands of fan tapes. In order to facilitate trades, a mimeographed “Dead Relix” sheet sprang up in 1974, and eventually grew to become a major music magazine, right up there with Trouser Press and Creem. In this glossy color book, longtime editor Toni Brown, along with Lee Abraham and Ed Munson, pulls selected pages from the archives to create a unique view of rock and roll history, told mostly from the fans’ side of the security fence.

The typical Relix page consists of vivid graphics, interviews, and fans’ tales of the tribulations of following the band. In the early years, the images were hand drawn with the obsessive detail that fills the high school notebook of budding artists. The early issues cover little beyond The Dead and musicians from the same San Francisco Jug bands set – New Riders of the Purple Sage, Hot Tuna, and Jefferson Airplane. As the years go by, The Dead reduced their touring and the magazine drifted toward mainstream punk and new wave acts, broadening their reach, yet annoying the diehard fans. Just as bands have their internal problems, so do magazines, and editor Jeff Tamarkin quit, turning over the publication to Toni Brown. Brown had been involved with the magazine, but not as an editor. She grabbed the reins and headed the magazine back to its roots, but times had changed: the band was more popular than ever, yet they couldn’t keep up with the bootleggers, drug dealers, and gate crashers who did nothing for their reputation. The Deadhead scene shifted from a convivial bunch of buzzed friends to a dangerous powder keg that often exploded into riots and DEA busts. When Jerry Garcia died, the band shattered, and Relix became something of a relic itself.

The articles in Relix have a chewy quality, similar to a volunteer-written community newsletter. That doesn’t diminish their fascination; topics range from technical points on taping to avoiding the narcs. There are plenty of band interviews, although they often as not boil down to “if that’s what you think the lyric is about, that’s fine with us.” While the text plods, what’s really special is the graphics. They run the gamut from swirly acid trips to crude cartoons to professional illustrations and photos. The only real issue with this publication is its binding – the text and graphics run deep into a tightly-bound gutter, making it a challenge to read the words without breaking the spine. Jump over that low hurdle, and you’ll have a fine flashback to a happier, hippier decade.