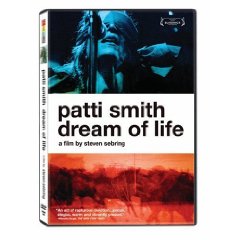 Shot over 11 years, this glimpse into the world of Patti Smith is much like its subject. Dark, intelligent, passionate, and ultimately unique, the film shows us the circumference of Smith: poet, mother, daughter, sister, wife, and widow. While certain elements of her life make for surreal watching – Patti in her parents’ kitchen as they prepare “gourmet” hamburgers and she calls her father “Daddy” or the high electric poet laureate of punk showing off her child’s infant clothing – this film artfully illustrates all that is Patti Smith. From her days at the Chelsea Hotel with Robert Mapplethorpe to railing against the Bush regime 30 years later, she remains one of this nation’s most intense and intricate of artists, steadfastly outside whatever passes for the mainstream, her vision and taste never wavering for a moment. This documentary captures her emergence from the relative isolation she lived in following the death of her husband, the MC5’s Fred “Sonic” Smith, and her return to live performance. Along the way the characters that inhabit her world, from playwright/actor Sam Shepard to Bob Dylan, the late Benjamin Smoke, or longtime cohort Lenny Kaye, all seem both drawn to and energized by the energy and life she exudes, captive to her mad and rambling vision.

Fans looking for a Behind The Music snapshot of the life and career of Patti Smith will perhaps come away disappointed and confused by this film, but one can’t imagine that she attracts many fans who want for easy answers and snappy summaries. No, Patti Smith demands as much from her audience as she gives in return – hard questions, probing honesty, and complete abandonment to the majesty of a moment. Patti Smith wasn’t made for these, or any single moment in time. We should be thankful we get to witness it firsthand.