After being thoroughly impressed by the diverse and charming manner with with Norwegian songman Sondre Lerche approaches the canvas of folk music with a broader-than-some palette, I had expected his live show to be a lively affair. Perhaps it would have been had the opening act not left us all wanting to either a) cry about every wrong we’ve ever suffered, or b) curl up in a ball and sleep. 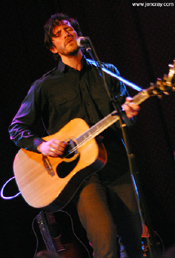 Jesse Marchant (or JBM, as he is called on the road), the source of the room’s near slumber, has a gorgeous voice and pretty acoustic melodies, but his painfully shy delivery made said songs become lullabies and little more. It wasn’t just that he only opened his eyes in-between songs, nor was it merely the scared-little-boy way in which he hid behind the microphone. The feelings Marchant emotes are of the same kind of heartbroken melancholy that Nick Drake or Alexi Murdoch gives off. There’s a time and a place for such sweet sorrow, but this was not it. I hadn’t gotten bundled up and ventured out into the cold in order to mope.

Folk music doesn’t always have to be boring, folks! 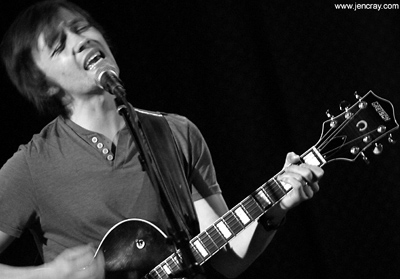 As Lerche’s time onstage approached, the room had crept its way from being reasonably crowded to Good God! All of these extra bodies are sucking up all of the oxygen. Orlando was hip to the subtle nuances of the man best known for soundtracking the little seen, but lovable, indie flick Dan In Real Life. Who knew?!

The sprite young Lerche flashed his bright crystalline eyes and gentle smile as he strapped on a beautiful blue Gretsch that needed some tweaking before music could be made. “This is my first time in Orlando, I think that I owe it to you to at least be in tune,” he joked while twisting the knobs. 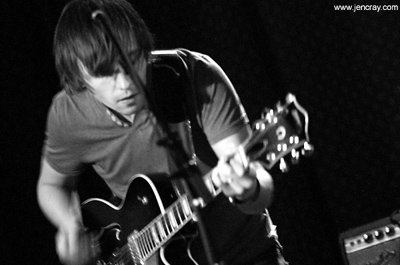 Within seconds it was clear that the Nordic songster approaches his live performance with the same unrestrained gusto with which he records his music. Stalking center stage with his guitar pointed out like a shotgun at moments, the shaggy blond pummels the room with equal amounts of perky pop music and heart hugging balladry. Shirking the bounds of traditional folk music or indie rock, he hovers somewhere in-between – like Franz Ferdinand crashing into Donovan; Neil Diamond meets Belle and Sebastian; or The Avett Brothers covering Burt Bacharach. 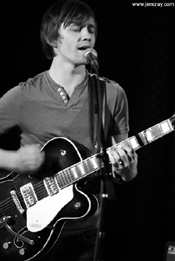 At the start of his evening-saving set, he woke up the room with “Airport Taxi Reception,” a brilliant three minutes that allowed the musician to not only stretch his vocal chords (ping ponging back and forth from low to high), but also to work out the kinks in his fingers by plucking the hell out of the guitar. From there it was one crowd pleaser after another, with “Heartbeat Radio” being a clear winner for the ears of Orlando.

The comfortable chit chat and stories that he told between songs gave the whole night a pleasant living-room feel. Though our feet may have been metaphorically kicked back, there was no napping to be had during this set, and though the show found Lerche with only his guitar to accompany him, his infectious energy filled up the space left empty by the missing instruments.