Animals and Objects In and Out of Water

Animals and Objects In and Out of Water 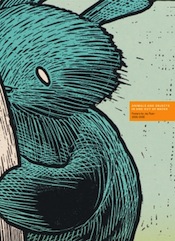 Rock and Roll posters are nearly as ephemeral as the shows they promote. Their transience makes them perfect snapshots of the graphic design ethos of the day, and they can become as iconic as the swirly hippy posters of Jefferson Airplane or the minimalist hand-drawn punk posters of Black Flag. Jay Ryan’s been putting out very distinctive images for bands and art festivals for the past decade, and he collects his most recent works in this nicely bound collection. Ryan uses a number of distinctive tropes in his work – incompletely erased layout lines add energy and motion to the images while multiple screens with innovative inking methods make the colors pop. But Ryan’s biggest obsession involves bicycles and animal forms.

Ryan’s menagerie is pure Calvin and Hobbes; his animals typically look overstuffed and even their teeth seem to lack sharp edges. His greyhound, Seth, is often as not on the prints, but orcas, cats, and amorphous beings that might be classed “mammal, unknown” appear regularly. Fish stride down the street on two wheels, cats dream of horrors only they can see, and one lost bunny screams, “They’re stealing my carbon!” His print of a bowl of sleeping finches is precious, but the mood he creates is never maudlin – this menagerie might as easily create havoc as laughter. Each image comes with a brief paragraph, and the only picture of the artist is a back of the head shot as he sits in front of his iMac. Art books are typically good for a few look-throughs and then migrate to the stratosphere of the bookcase next to Gravity’s Rainbow and those pesky Russian novels, but this book might become a close companion of your coffee table. Ryan’s work is simultaneously charming and modern, the work of a true graphic genius.