Test driving both a new drummer (Hot Water Music’s George Rebelo recently stepped in for long-time member Warren Oakes, who’s left the band to open a Mexican restaurant in Gainesville) and new songs off of the upcoming White Crosses album, Against Me! headed out on a mini Florida tour that found them slipping into the tight confines of The Social. 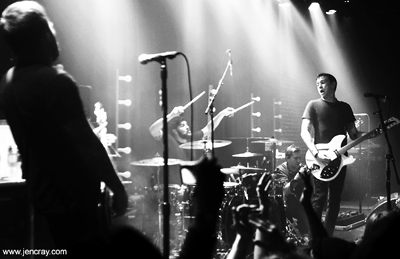 Jen Cray
Against Me

For a band that has – in the last two years – sold-out headlining gigs at far larger venues, wowed the masses at Bonnaroo, and played arenas opening for Foo Fighters, this intimate show was something special. It should come as no surprise that the show sold-out well in advance.

Ninja Gun opened up and, though their countrified cow punk vibe didn’t resonate with me the last time I saw them play, they nailed down a solid foundation of good sounds for the start of the night. Kicking things off with a cover of Frank Black’s “Headache” gave a little insight into the roots of this Valdosta, GA band. I had thought them a little too country for my taste, but hearing the man behind the Pixies as an influence made my ears perk up. Suddenly both “Eight Miles Out,” and the title track off of their album Restless Rubes made more sense to me. A cover of The Beatles “Please, Please Me,” introduced by front man J. Coody as “a punk rock song,” further solidified this quartet as a band with smart roots, and well worth listening to. 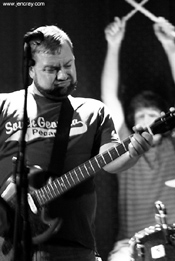 As big of a draw as Against Me! was for the night’s patrons, having Tim Barry on the bill surely brought in more than a few fans as well. The former front man for Avail has been telling it like it is, acoustic-style, for a few years now and his heart-on-his-sleeve rebel musings are akin to Johnny Cash or Mike Ness. His very first song was a tear-jerking, fist in the air tale about a friend who’s in jail for taking the fall for his sister who killed her abusive husband. This guy is no-holds-barred when it comes to songwriting, and not even a broken hand could deter his passion for performing.

“I’d tell you how much my hand is killing me right now, but it was my own fault for beating the hell out of this guy in Canada for talking shit,” he confessed. 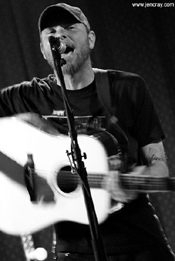 He was all about the confessions between songs – even caught himself revealing a bit too much about the softer side of Tim Barry at one point, “I don’t mean to get all Dashboard Confessional on y’all.”

His lyrics are intense and honest, his delivery is blood boiling, and his demeanor is intimidating (though his stories about his love for his toddler niece reveal him as a bit of a teddy bear). He closed out his wow-worthy set with “Avoiding Catatonic Surrender,” and seemed remarkably touched by the cries for an encore that there was not time to give. 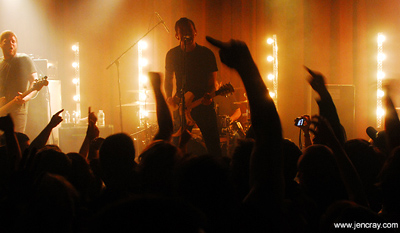 Jen Cray
Against Me

Squeezing onto the narrow Orlando stage, the 2010 version of Against Me! turned The Social into a smoke filled, colorful demonstration of what happens when punk rock becomes arena-sized. It’s in the way they hold themselves onstage, it’s in their songwriting that has gotten both more mature and more melodic over the last couple of years, it’s in the way they can inspire fans to see them again and again and again and still go ape shit once the lights dim down. Like Green Day, these former gutter punks are cleaning up nicely and could very well be bound for arenas and stadiums if they continue along the path they’ve set upon. 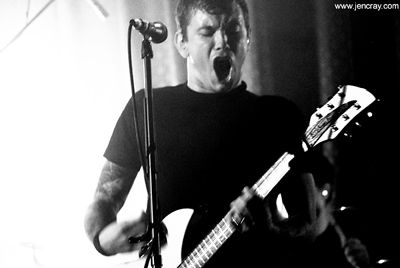 The 90-minute set could hardly touch upon all of the killer songs brought forth by this black-clad band over their 13 year career, and since this tour’s purpose was to debut some of the brand new goodies, there were a lot of unknown songs played. How do they measure up to the brilliance of 2008’s New Wave? They pretty much take up where that record left off, and that’s a good thing! Rebelo brings a bit of a heavier beat to the table, lending the songs a slightly more aggressive base. As easily as the new drummer fits in with his longtime buddies, Warren Oakes and his forever smiling bearded face, and jolly presence, was sorely missed. 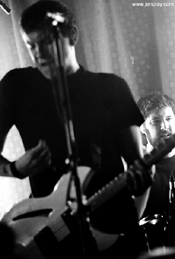 Standing in front of a low-fi, high impact setup of white light bulbs that flashed continuously beneath the ever- changing lights, the band stormed through the new stuff while slipping in songs dating all the way back to their 2002 debut (like the mayhem inspiring “Those Anarcho Punks Are Mysterious…”). The pit never let up and no venue security or “absolutely no stage diving” signs could stop a few determined individuals from grabbing some air – even if it meant being escorted out after. “Thrash Unreal,” “Miami,” “White People For Peace,” “T.S.R” – these songs beg the body to move, and the bodies obliged. Even the gray-haired fans who hung back by the bar were shakin’ it. 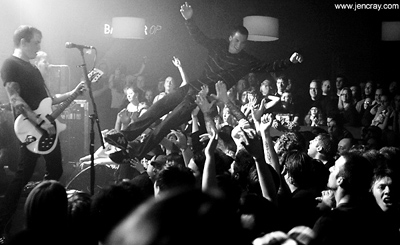 There was little chatter from the stage, and vocalist/guitarist Tom Gabel was in full-on concentrated front man mode, but that didn’t even matter. The room was on fire in response to the band and the thrill that comes from seeing a band too large for a small stage standing upon it nonetheless. By the time the final chords of the final encore extinguished, Against Me! had proved once more that they are, as Tim Barry pointed out earlier, “one of the greatest bands around today.”