with Dear Landlord, How Dare You, Wartortle, B.T.H.

Every once in a while one of Orlando’s smaller downtown clubs will schedule an afternoon punk show, giving the fans a great excuse to get rowdy before the sun has even set. These shows have a more casual vibe than their late night counterparts, more akin to house parties than concerts. BackBooth’s most recent foray into matinée land offered up a five-band bill topped by Dear Landlord and the newly-signed-to-Epitaph Records, Off With Their Heads. 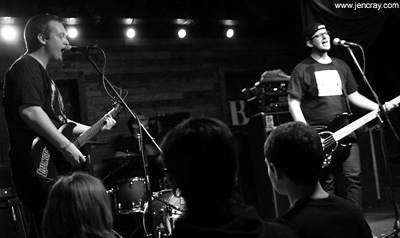 Even with the temptation of the most gorgeous sunny day since November, a full palate of concert choices happening around town to compete with (including both Dropkick Murphys and Soulfly), and the fact that three of these bands could also be seen at the following weekend’s Harvest of Hope Festival just two hours north in St. Augustine, the club crowded up quick. 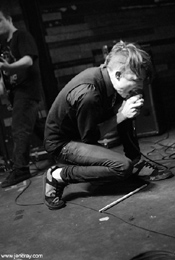 B.T.H., a confident Orlando trio that owes a musical debt to NOFX and Screeching Weasel without being too much like either band to be considered poseurs, stirred the room up early on, followed by the uneventful Wartortle, whose singer’s screamo approach to vocals clashed wildly with the hardcore punk played by the rest of the band. The kid had style and stage presence, he just seemed to be fronting the wrong band. Ironically the vocalist for B.T.H., Andy Minor, plays guitar for Wartortle. I couldn’t help but wonder what the band would have sounded like had he grabbed the microphone. 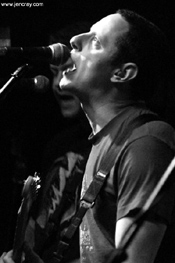 How Dare You has been steadily building up a buzz – even garnering a mention in this month’s Alternative Press as a “band to know in 2010.” The Orlando group seems to be going for broke, climbing that slippery slope toward success, and it shows. Their performance has tightened over the last two years, and their vocals are stronger, the songs are getting catchier (“Beacon St.”). The band has stepped up to the plate, and this audience reacted with not just mellow approval, as they did with the previous bands, but with genuine enthusiasm.

The wakeful state of the audience for How Dare You’s set paled in comparison to the effect Dear Landlord had on the crowd! Comprised of members of The Copyrights, The Gateway District, and Off With Their Heads, the Minneapolis band may not be A-list enough to be deemed “supergroup,” but for fans of rough-edged pop punk they certainly qualify. With lead vocals shared three ways, every song has a gang vocal feeling, and the songs themselves are pure ear candy and result in scream-alongs on the part of the swirling mass of fans. Dodging crowd surfers and protecting body parts from friendly but forceful moshers, watching Dear Landlord is an exhilarating experience! 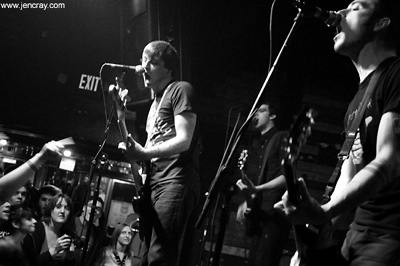 Their regrettably short set not only inspired the bodies to start movin’ and the kids to start stage diving, but required the band to cram in just about every song off of their 2009 debut, Dream Homes. If it wasn’t for the equally as stage dominating performance of Off With Their Heads, they could have been accused of stealing the show out from under the headliners. Alas, their fellow Minneapolis mischief-makers are cut from the same cloth and that cloth makes for one seriously satisfying punk show! 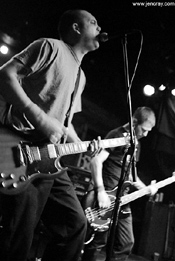 Though the room had paused for a breather to nod along calmly at the start of Off With Their Heads’ set, a few songs in the adrenaline kicked in once more. Those stagnant souls wishing to stand still were quickly pushed to the back and sides of the club to allow room for a pit. It wasn’t a drunken pile-up pit, the sort that so often takes over a room with its testosterone at hardcore shows, but a roomy circle welcoming even to the middle schooler who was spotted diving into outstretched arms, grinning like it was pizza Friday in the lunchroom.

As pop as their melodies are they’re given a gruff topcoat by the smoker’s vocals of guitarist/lead singer Ryan Young. Lyrically the songs are packed with cynicism, angst, and piles of anger, but you may not notice lines like “Until the day I die/ I fucking swear/ I’m gonna make your life as miserable as mine,” as you’re screaming them from the top of your lungs because you’re having such a great time while you’re doing it! Though they sound nothing like The Misfits, they remind me of them in that sense. Desolate and dark lyrics are buried beneath groovy beats and irresistible power chords. 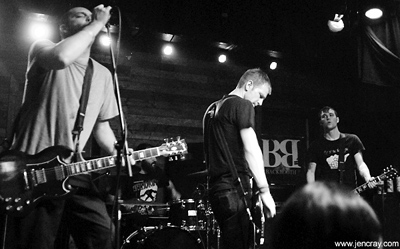 The evening wrapped up before most shows even begin, just shy of 9pm, allowing this little punk rock fan to make it home just in time to see the Academy Awards! Because, really, what better way to follow up an afternoon of drinking and head banging than with a night of toasting Hollywood’s elite?!