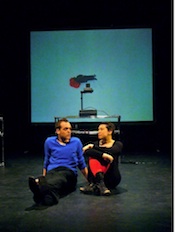 “We thought it would be fun to be murderers, and lovers.”

With this bold, explosive opening, the performers in Third Person (Redux) proclaim their intentions clearly and bluntly as a smoking gun: to explore the connection between love and death through the prism of Bonnie and Clyde. And during that 80-minute thrill ride at the Green Room in Manchester, England on March 19, they took a close look at the connection between black-and-white facts and the technicolor fantasy of myth.

This is one of the newer pieces by the Proto-type Theater, a company based in Brooklyn, NY and Lancaster, England. It was originally written by artistic director Peter Petralia as the dissolution of a love affair between two jaded New Yorkers. With the company’s relocation to England, something different emerged – a grand disquisition on the meaning of life and death, and donuts.

The performers, Gillian Lees and Andrew Westerside, used decidedly lo-fi effects like dolls, overhead projectors, drawings, and videos as they danced along a tightrope between the themes of fame and performance, acting and being, and the ultimate solitude of the human existence. The result is a piece with wit, humor, tenderness, and insight. 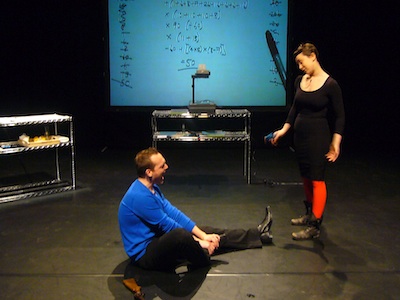 “We’re not lovers, but we play lovers,” they tell us.

Inevitably, they warn, Bonnie and Clyde must have Sex. And they will die.

There is a moving scene where Westerside portrays Clyde lying on a jail cell cot, staring at the ceiling and dreaming of his reunion with Bonnie. There is her moment worrying over an accidental pregnancy and her later regrets in not having the child. There is a quip about how a handbag makes a perfect accessory to murder, especially if it’s big enough to hide a handgun.

Speaking of guns, the performers put on a comically grim demonstration with cap pistols of the effects of getting shot – in the head, in the stomach. And how hard it is to voluntarily stop breathing, “unless someone helps you.”

As for breathing, they draw the connection between oxygen metabolism and the creation of sugar, which is needed to keep these bodies going. Bonnie calls Clyde “Sugar.” They pause the narrative while Lees eats a donut. She has a monologue about making lemonade, about she and Clyde being lovers outside the system. She writes poetry. They would live together like firecrackers, “and when our fuses burn out, we’ll be together.”

Almost as entertaining, and nearly an extension of the performance itself, Petralia, Lees, and Westerside described the collaboration involved in translating the play from New York to England, and yet winding up dwelling on two very American icons. 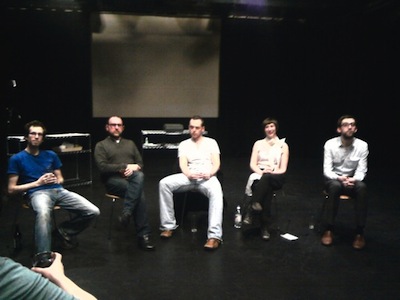 They improvised a lot, using autobiography and confession to develop a strong script, Petralia said. The technique allows for surprises during performance, like this night when Westerside took off on birds, then wove that in with the Bonnie and Clyde story, the facts of which are few and highly unreliable. Most people know the story through the movie with Warren Beatty and Faye Dunaway.

Oh, and it was about Bonnie and Clyde.