with Earl Greyhound and The Booze

I came excited; I left confused and a bit disappointed. OK Go live outside the RIAA mother ship, recording and making a success of themselves without submitting to the recording industry’s onerous conditions. They have the coolest videos since God sent MTV down to Earth to vex us, and that’s the problem – they make great videos, but are seriously lacking in the stage performance department. But I’m ahead of myself. 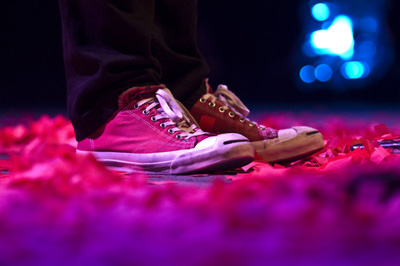 Chris Mullen
OK Go — lost in a sea of confetti.

Tonight’s show had two openers: Atlanta’s The Booze and Brooklyn’s Earl Greyhound. I was hanging out by the bands’ CD and T-shirt booths on an outside deck, avoiding the bass-heavy pre-show music. When The Booze came on after an abbreviated sound check, the audience was flowing in with unexpected speed. A New York Dolls riff was flying off stage, and the general thought in the air was, “my God, they’re just CHILDREN!” Well, I suppose not, but this band looks shockingly young, and plays music that recalls the era when rock and roll was itself young and brash. Chaz Tolliver looked like a spastic swaggering Mick Jagger before he tasted heroin’s dark kiss, and the lead guitarist looked like a pre-_Hard Day’s Night_ George Harrison, while bassist Jonny Gleaton had the cool of John Entwistle. Unlike most openers, who so often seem to flop around, not sure how to behave in front of a famous headliner, these guys shredded the stage and got the audience about as excited as I saw it all evening. True, Tolliver pretty much stuck to a single “grab the mic stand and bounce around” stance, but it was exciting, and his look and energy could take this band far. 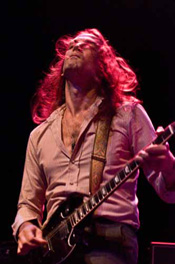 The next act confused me. After a ripping retro rocker and before a post modern pop group, Earl Greyhound presented a heavy metal progressive rock set dominated by the biggest, most kick-ass drum kit I’ve ever seen. Driving these skins was Ricc Sheridan, while lanky Matt Whyte played guitar and an Angela Davis clone, Kamara Thomas, played bass and keys. Drum solos were the mainspring of the show, and while the music might stand well on its own, it was a complete distraction from what we were all there to see. The Firestone’s booming acoustics didn’t help – this music was loud for loud’s sake. While I enjoyed watching Sheridan pound the drums, the energy The Booze unexpectedly injected in the room was running down Orange Avenue and heading toward Disney by the time the road crew came out to disassemble the monster drum kit and set up OK Go’s equipment. 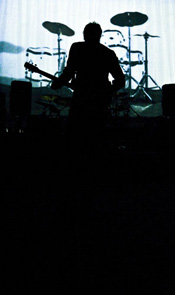 Going in, I knew that the wild video antics of “This Too Shall Pass” and “Here it Goes Again” weren’t going to appear on stage, that much I gathered from some interviews and the fact that these were effects even Pink Floyd couldn’t pull off. But I was hoping for something equally innovative and grabbing, even if it had to fit into a 20-foot moving van. What I got was a confetti blower and 4 guys who seemed afraid to step out of their spotlight. When the lights came up, the confetti blower was noticeable – They Might Be Giants had used one recently to good effect, but the confetti blasts began with the opening number, and repeated with greater and greater frequency. OK Go played the requisite hits, and the audience was appreciative, but there was never much energy. One or two audience members rocked out, but it never became contagious. Lead singer Damian Kulash stopped the show occasionally to discuss his arrest on a past trip through town, move a microphone out into the pit to do a soft number, or to discuss whatever topic weighed on his mind. It was the loudest unplugged show I’ve attended.

As the night wore on, a steady stream of people left, not enough to empty the floor, but enough to prompt a friend to remark “I’m not inspired to flee the premises, but… “ I agreed, four hours of standing on concrete in a hall with poor equalization was taking its toll, and then OK Go left for the pre-encore break. They came back, and it was visual magic. The lights went down, and the band appeared in the dark – a white LED marquee appeared on their backs, the band name rolled by like a slot machine winding down. The guitars were festooned with LEDs and long fur, and laser beams shot off the guitar neck, emitting red and green photons with enough energy to blind us. The instruments pulsed, and though the crowd didn’t, they at least hung around and applauded. It was as if ZZ Top’s “Legs” was remade in glow stick darkness. OK Go now emitted the utter coolness I came for. As the first 7/8ths of this evening faded from memory, I was finally glad I had come out tonight.