Collins Design, an imprint of HarperCollins 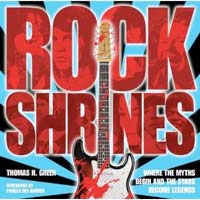 Never has a book made me want to gag on impulse as much as this heavyweight, high-gloss coffee table tome. Rock Shrines is a truly tasteless, exploitative waste of pulp and ink from which only the most desperately perverse and sycophantic star worshippers could derive pleasure. It’s positively ghoulish and artless, indulging in the necrophiliac fantasies of rock star worshippers who never emerged from their pimply adolescence.

You know it’s crass and tasteless when the author and publisher promote the hell out of the foreword written by Pamela Des Barres, world-famous groupie and erstwhile author herself. Not only that, but they place Des Barres’ pearls of wisdom strategically throughout. Adding to the garishness of it all are packets of “rare facsimile documents and memorabilia.” If that isn’t a bit of oxymoronic PR nonsense, I don’t know what is. Do we really need to see a copy of Dennis Wilson’s death certificate? Or a drawing of the crime scene where Kurt Cobain was found?

Not to say there isn’t valuable information here – if you want to see where your favorite rock idol died or was laid to rest. After all, it was assembled by British rock journalist Thomas H. Green, who has written for Mixmag and Q Magazine. His prose is clear and simple. But all this rehashed information begs the question, how relevant is a book like this in the age of the Internet? If I want to find out where Gram Parsons is buried, I can Google it.

And granted, making money off dead rock stars who died before their time has been big business for a long time. Witness Graceland and Sun Studios. Heck, I’ve made my pilgrimages to Memphis and Abbey Road. I always stop by Strawberry Fields any time I’m in New York. But I fail to see any redeeming value in this book. Most of it rehashes the dusty facts we already know about the deaths of Buddy Holly, Elvis Presley, and Janis Joplin. It also half-heartedly dredges all the lame rehashed conspiracy theories associated with the deaths of Jim Morrison, Kurt Cobain, and Brian Jones, and then limply dismisses them.

Some of the entries mystify. Why is there a chapter for Dee Dee Ramone, into which the deaths of Joey and Johnny Ramone are thrown in? Why isn’t Joey Ramone worthy of his own death page? Not to mention countless others who are not included in this book at all. What’s more, the book devotes pages to the likes of Andy Gibb, Patsy Cline, Florence Ballard, and Michael Jackson. Important musical figures to be sure, but what do they have to do with rock’n’roll?

Do we also need to know about the mundane deaths of musicians from diabetes, pancreatic cancer, and heart disease for that matter? What does Woody Guthrie, a man who died of Lou Gehrig’s disease have to do with the rock ‘n’ roll myth of dying young? At some point you have to take the Eagles song “James Dean” as a guide and draw a line at those who were too fast to live and too young to die, bye bye. If they died young and left a beautiful corpse, then they should be included. Those who died in their beds of old age, not so much.

As Neil Young famously sings: “It’s better to burn out, than to fade away.” But many of the stars featured in this sad, cynical ploy to make money off of dead rock stars managed to linger on far past their relevance.